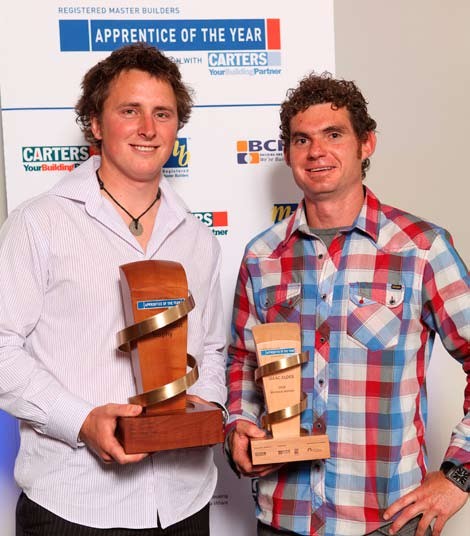 Russell Bruce of Nelson’s Russell Bruce Contract Builders was rapt when his apprentice, Isaac Alder, took out the Registered Master Builders 2010 Carters Apprentice of the Year. Isaac, 23, accepted the award, along with the Hank Lieshout Trophy, at the Boatshed, Wellington, in October last year.

Russell took Isaac on as an apprentice five years ago when the company was going through a busy period. “Isaac showed good knowledge. He was pretty green when he started out, but he knew how to use the tools and he was a quick learner,” Russell says. “It was a great achievement for both Isaac and I to be recognised. Housing companies like ours often have the stigma of being quick and rough, so we’ve proved that our system works,” he says.

Russell has no doubt that the Apprentice of the Year is a valuable competition for apprentices to get involved in. “They get to see the other side of building, and it shows them that there is paperwork involved. But, most importantly, they learn how to sell themselves,” Russell says. He strongly encourages other companies to take apprentices on. He has a guiding eye on four others himself.

“If a young guy is doing an apprenticeship, they’re a lot more settled because they’ve got a goal in mind. It’s also a real bonus having the support of the BCITO,” he says. “We’re currently working on eight new houses in the Nelson area. I’m looking to start focusing on the design and build area.”

After being in the industry for 14 years — self-employed for 10 of them — and contracted to Jennian Homes for the past nine years, Russell and his team have formed a stand-alone company.

“I like to get more involved with clients and the planning process of building a new home,” he says. Russell also plans to rename the company Bruce Design & Build within the next few months, and is in the midst of launching a new company web site.

He has been a Registered Master Builder for three years, and says he joined because he wanted to ensure that his clients have the piece of mind of having the Master Build Guarantee. “I’m proud of having this trustworthy and approachable team who go the extra mile and deliver on time, within budget and with no hidden costs. For me, it is all about good communication and planning,” Russell says.