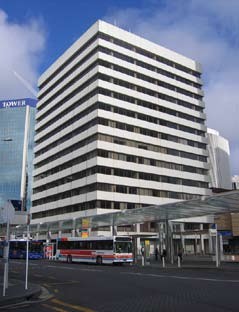 Wade Jennings, the Peddle Thorp architect who led the design team, says the practice acknowledges the opportunity and responsibility it has towards improving the economic and environmental performance of existing buildings. “We are living in interesting times. Globally, there is a growing focus on preservation of energy supply as well as reducing carbon emissions and waste.” Mr Jennings says.

“This is driven as much by economics as it is by a desire to preserve the future. With proposed carbon pricing measures potentially impacting energy costs, properties that use less will have a competitive advantage over their rivals.”

Economists and environmentalists are beginning to look closely at the opportunity that existing urban environments present. Retrofits and refurbishments of existing buildings have the ability to make immediate energy and carbon savings while, at the same time, reactivate financially underperforming property and enliven the city sites they occupy.

“We have seen a marked improvement in the urban environment immediately surrounding 21 Queen Street as a direct result of activating the street edges with retail, and addressing the pedestrian environment in a visually engaging way,” Mr Jennings says.

This regenerative benefit can also be seen to great effect at the Britomart Precinct where Peddle Thorp has recently completed Westpac Charter House and the new East Building, providing a new home to more than 2500 city office workers. Both projects integrate existing structures in their design.

Existing buildings represent at least 95% of urban building stock, and there is a growing international movement towards improving their environmental performance. “Rather than simply focus on new build projects we believe we can limit energy consumption by reusing existing structures specifically designed to restrict ongoing operational costs,” Mr Jennings says.

“This approach can deliver true bottom line benefits for our clients as well as help reduce overall energy use and carbon emissions. “This ‘big picture’ approach has a lot more to do with sustainability than planted walls or other ‘green bling’ that’s often showing up in the market.”

Peddle Thorp has a strong record in ESD projects dating back to Auckland’s Vero Centre for Kiwi Income Property Trust. New Zealand’s largest office tower was conceived in 1994 with long-term energy efficiency as a key design driver. The resultant building set a new standard for energy efficiency in New Zealand, and won the RICS Building Energy Efficiency Award on its completion in 2001.

21 Queen Street is the latest in a series of Auckland high rise office buildings designed by Peddle Thorp that includes the Vero Centre, the Lumley Building, 151 Queen Street and the ASB tower on Wellesley Street.

Its striking facade comprises high performance double glazing which has been designed to control solar heat gain while allowing vast amounts of daylight on to the working floors. The double glazing also contributes to the acoustic quality of the office space by cutting out the street noise of a busy part of the city. “People are often surprised when we tell them that glass can be green,” Mr Jennings says.

“Careful attention to the ratio of insulated panels to clear glazing, as well as the use of high performance low-e coatings and, in some cases, different gases in the double glazed units, can enable the rest of the building to work far more efficiently.

“The other aspect of the facade design that we look at is the amount of material that can be recycled — 100% of the aluminium and nearly 100% of the glazing materials can be easily removed, recycled and reused. “We believe responsible design is about making single elements do many jobs in an elegant way. The facade gives the building identity — it is the thing that people see and the thing that relates the building to the rest of the city.

“People may look at the building and think it ‘looks nice’ but would not know that the facade has been carefully designed to insulate the building, reduce the need for air conditioning and almost halve the ‘normal’ amount of electrical lighting used in the building.

“In fact, we have had reports that on bright days, many occupants choose not to use the lights, which is a massive change in behaviour for office workers,” he says.