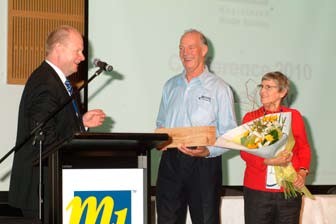 When Hank passed away in July last year, he was still involved with a great many of the organisations he dedicated himself to over the years, and his company, Pukekohe Builders Ltd, is still going strong today under his son Michael’s management. “Dad was a very likable and approachable guy. He had time for everyone,” Michael says. “The huge amount of work he did earned him a lot of respect in the building industry, and also the wider community.”

As everyone he met knew, Hank was completely soccer mad. A founding member of the Pukekohe Association Football Club, over the years Hank was a respected player, coach, referee, life member and patron, and he played a major role in building the club into what it is today. However, it is Hank’s tireless efforts in the construction industry that most people reading this will remember him for.

Hank represented and guided the Registered Master Builders Federation at a local, national and international level for almost 40 years. The mark he has left on the organisation has been huge, and there are very few people within the organisation’s ranks who haven’t been influenced by him over the decades. For more than 10 years from 1982-92, Hank was a member of the Registered Master Builders Federation Education & Training Committee, of which four years were spent as chairman. In this role he worked hard to improve the education and training of apprentice builders and carpenters, which has had a huge contribution to the industry.

Hank and his wife Nellie are also legendary for having attended more than 30 RMBF annual conferences in a row, and the RMBF looks forward to hosting Nellie at the 2011 event. “He was passionate about training and improving the standards in the industry,” Michael says. “He wanted to upskill carpenters and put proper processes in place so that it would encourage and develop carpentry skill in New Zealand.”

Hank’s involvement with a range of other construction training organisations, including BCITO, UNITEC, Manukau Institute of Technology and the New Zealand Carpentry Apprenticeship Committee means his level of commitment to training is unparalleled in the industry. Last year the Registered Master Builders Federation, BCITO and Carters renamed the Apprentice of the Year competition trophy the Hank Lieshout Trophy in honour and recognition of his unwavering dedication to training in the industry.

In addition to his efforts in training, Hank was instrumental in the setting up of the Registered Master Builders Site Safe programme. Designed to give guidelines to the construction industry for health and safety on construction sites, Site Safe was overseen by Hank as the chairman of the board from 1998 until 2000, after which he continued on the board for a further four years. “I honestly don’t know how he did it all on top of running a company, going to all the meetings and having a family. He was a pretty full-on guy, but he was always totally approachable and willing to help out,” Michael says.

Sorely missed by Nellie and their five children, Hank will always be remembered fondly for his massive contribution to the industry, and for his integrity. Colleague Graham Coe sums it up well. “Integrity. This word was invented for people like Hank.”