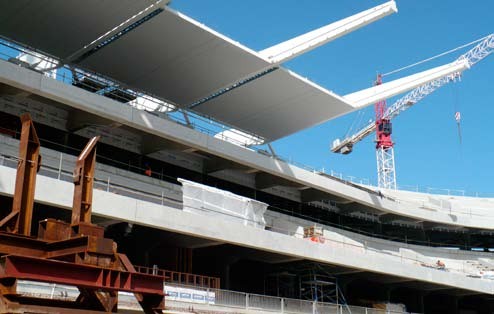 Main contractor Fletcher Construction subcontracted Grayson Engineering Ltd to supply and erect the steelwork. As with every significant new structure, the resolution of the design concept and how it will succeed takes place in a meeting of the minds of the architect and the structural engineer — in this case Populous and Aurecon.

Together they selected a box girder solution as the support for the roof. There would be 16 girders in total, each up to 2.7 metres in depth and tapering over a length of 33 metres. Grayson Engineering, ably assisted by Eastbridge of Napier, were about to fabricate the largest box girders ever seen in New Zealand. But first the New Zealand Institute of Geological and Nuclear Science conducted a site-specific, seismic hazard assessment to ensure the earthquake threat was addressed.

Aurecon’s Lana Duboka reports that the new structure complies with the New Zealand Building Code Standard for a 1000-year return period for earthquake and wind loadings. “Aurecon then built a model of the stadium and its surroundings in order to conduct wind tunnel tests for loading,” Ms Duboka says. “The Aurecon engineers were then able to refine the design of the girders and other roof and facade members.”

Grayson Engineering commercial manager Colin Berger says some 900 tonnes of steel were used. “In addition to the girders, we fabricated the steelwork between them and the cigar-shaped braces. These were painted and transported to the site in sections for assembly,” Mr Berger says.

“For accuracy we used a jig, in which we assembled the bracing. This was then lifted into position and secured. We then lifted the mid-section straight off the back of a truck and bolted the splice from inside the box girder. This required 28 M36 and M20 grade 8.8/TB bolts to resist the significant bending moments,” he says. “The positioning at the back end of the girder was critical because an error of one degree would result in more than half a metre’s displacement at the other end of the girder. So we used surveyors to make sure our positioning was correct.

“In the concrete beam to which the steel had to be attached there was a pocket that allowed the cigar-shaped braces to be adjusted to within the required tolerance. The shape of the braces was entirely the architect’s choice.” Architect Daryl Maguire of Populous wanted a slim and elegant look.

“It was purely a matter of aesthetics. Tapering the bracing elements into cigar shapes makes them appear more elegant than a straight shape, and it also reflects the loads the member will take,” Mr Maguire says. “One of the beauties and challenges of working on a stadium is that the structure is exposed, making the visual aspects as important as the structural performance.

“Sometimes the architect has to fight hard to prevent creative concepts from being cut or compromised. Maybe it’s easier to challenge an architect in matters of taste, but it’s not so easy to argue with an engineer, because then you need the maths!

“Early in the design work, Populous and Aurecon collaborated in developing the big picture concepts, and worked closely with the cost planners to keep the structure within budget. For both the architect and the engineer, it was a very positive experience,” Mr Maguire says.

Once the box girders were secured, the sub-assembly consisting of the roof infill section was lifted into place. Each of these had an aluminium soffit (cladding underneath), obviating the need for scaffolding and, thus, saving time and money on the erection procedure.