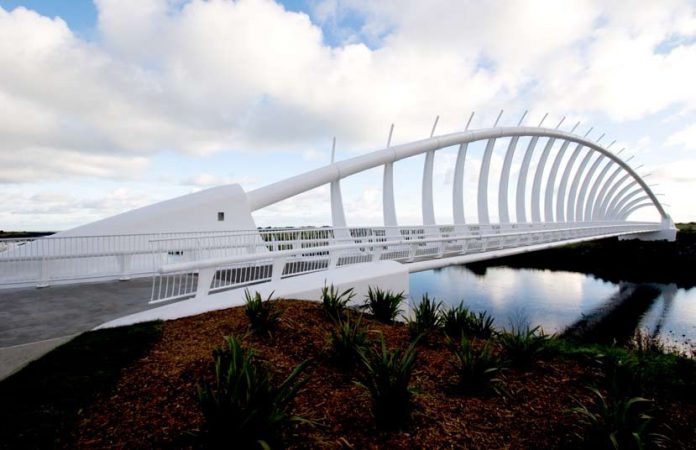 The awards are good, but what really matters, Mr Whitaker says, is that the design team has a strong attachment to Taranaki and its community, and was pleased it could give something back to the city. “It is a huge honour to do so well in the company of world class bridge builders,” Mr Whitaker says. “And a small local company designing and constructing this structure in itself was a challenge, with a very satisfying end result.”

The 70m, single-span, tied arch pedestrian and cycleway bridge opened in June 2010. In early September, it won Roading New Zealand’s Supreme Award in the 2011 Roading Excellence Awards in Auckland. At the same ceremony, the team behind the bridge also received the Winstone Aggregates Excellence Award for a Minor Road Project.

In August, the bridge was the category winner for the Industrial and Infrastructure Project, and Supreme Award winner in the Taranaki 2011 RMB Commercial Project Awards. In June, it won the 2011 International Footbridge Award in Poland in the Medium Span Aesthetics category, competing with six bridges from Europe.

In May it won the 2011 Arthur G Hayden Medal at the International Bridge Conference in Pittsburgh, for a single recent outstanding achievement in bridge engineering demonstrating innovation in special use bridges.

In July it won the award category for Projects $2 million to $10 million Bridges in the 2011 Ingenium Excellence Awards — Ingenium being the brand name for the Association of Local Government Engineering NZ Inc.

The New Plymouth District Council commissioned the bridge to allow the existing New Plymouth Coastal Walkway to be extended to the suburb of Bell Block by crossing the Waiwhakaiho River and Rewa Rewa Reserve.

A consortium of Whitaker Civil Engineering, Novare Design, Apex Consultants-CPG and Fitzroy Engineering designed and constructed it, with Peter Mulqueen as principal architect. The council, the New Zealand Transport Agency, and the Whitaker Family Trust funded it.

Mr Whitaker says the bridge’s iconic appearance and characteristics reflect the unique challenges the team faced when designing and building it. The challenges were to honour the Ngati Tawhirikura tribe’s relationship with the Rewa Rewa Reserve as sacred land, and work in an environmentally-sensitive area.

On the east side of the river is a historic pa and on the west side, a burial ground. Designer Peter Mulqueen shaped the bridge to “touch lightly” on the burial ground side, which precluded heavy designs such as cable stays and angular truss structures. In addition, the team had to avoid river contamination and disturbance, precluding the use of even temporary piers.

To accomplish this, Fitzroy Engineering manufactured the superstructure at its workshop 1.5km from the bridge site. The superstructure was then moved to the site as a single 85m long, 85 tonne unit and erected without the use of temporary staging in the waterway.

This was done by putting the unit on two 12 wheeler truck bases at the engineering yard, welding it to the bases, then using two trucks to simultaneously push and pull it along the road, across farmland and a golf course, all incident and damage-free.

Once at the river, the front end was towed across on two motorless tractor units — that did not contain oil that could pollute the river — by a crane on the far side. This crane, and a similar crane on the near side, lifted the bridge onto its already built supports. The deck was then built in situ and finishing work done. The bridge consists of three steel tubes — the heel and toe tubes beneath the deck and the arch tube connected to 19 ribs.

It contains 85t fabrication steel, 62t reinforcing steel, and 550 cubic meters of concrete. The bridge deck is 4.5m above the river’s normal flow level. The long free-span 3.25m-wide structure tested the team’s technical expertise. The inherent torsional stiffness of the three tubes and the ribs form what is known as Vierdeel trusses, which stiffen the edges of the deck.

With the ribs, which resemble a whale skeleton, yielding to the prevailing wind, the unique and highly asymmetrical bridge is aligned to Mount Taranaki, with the skewed arch framing the mountain from the west side.

The bridge was also designed to evoke a sense of wind as a metaphor for the enduring spirit of the dead buried at the adjacent site. “It’s so unexpected, a beautiful piece of art in this breathtaking solitary landscape — it fits beautifully,” Mr Whitaker says.

In July 2010, its first full month of operation, the bridge was used by 55,756 cyclists and pedestrians. In the past year, close on half a million people have visited the site. “It is iconic, it is special, people come from all over the world to see it, and our community is very proud of it.” • Watch the bridge being moved to its site on youtube. Search for Te Rewa Rewa Bridge.mov.