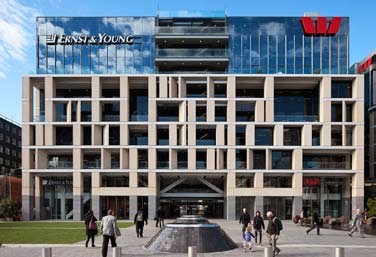 Pi has its origins in Egyptian ancient history and, as with that epoch’s ancient pyramids, Britomart’s most-recently completed East building has been designed and built based on dedicated teamwork. Peddle Thorp director Richard Goldie says the building includes a number of design and technical challenges.

“Not the least of these was the fact it was built directly above the operational Britomart Rail Station,” Mr Goldie says. “This demanded a lightweight structural system that minimises load on existing station columns and piling. “At the same time it needed to provide a high level of isolation from the noise and track vibrations associated with a rail station.”

The structure is effectively three buildings in one, and each has achieved a 5 Star Green Star Certified Rating from the New Zealand Green Building Council (NZGBC) representing New Zealand excellence in green building. Innovations include large planted vertical green-walls at each end of the atrium, an inflated cushion ETFE atrium roof, and three sky-bridges across Galway Street connecting through to the earlier Charter House project.

ETFE is a transparent polymer material developed for the space industry, so it presents its own challenges Mr Goldie says. Peddle Thorp worked closely with Cooper and Company, JPW and Hawkins throughout the project. Working appropriately within the Britomart heritage precinct was one of the key design drivers.

Hawkins construction manager Terry Buchan says the early involvement of a local architect has been critical in achieving a first class build in the heritage zone. “We got together very early in the piece, and it was clear from the start we needed to understand what was important to each other. We talked with the team at Peddle Thorp regularly, and as issues came up it was great to be able to pick up the phone and discuss them with their team. “It was an excellent working relationship, and I believe that’s reflected in the results.”

Mr Goldie congratulated Hawkins for a highly demanding project superbly completed. He says Peddle Thorp brought critical local knowledge to the team, providing overall design development from the earliest JPW design intent. “Having people ‘on the ground’ is critical to properly engage with the contractor during the pre-contract period. You also need to determine early the critical details that reflect the way you are going to build, and there’s also a lot of basic work to be done — from technical design through to documentation and site observation.”

As a key member of the overall project team, Peddle Thorp oversaw the project “architecture” from inception through to completion. “Our working relationship with JPW over all three projects is exemplary in Peddle Thorp’s history, and is now a benchmark we are determined to repeat. It’s a credit to Cooper and Company that they had the foresight to enable a successful partnership to occur,” Mr Goldie says.

Cooper and Company Britomart development manager Sarah Ballantyne says the collaboration between JPW and Peddle Thorp was an important factor in the success of the project. “There’s no doubt Peddle Thorp did a fantastic job of interpreting the JPW vision and giving it detail, and the working relationship the architects developed was excellent,” Ms Ballantyne says.

Peddle Thorp lead architect Andrew Kissell says the Britomart East project has been very satisfying for him and his team. “Technically it has been very engaging, and if I was to highlight anything from the experience it has been that of a great team of people working together to achieve an excellent result.”

Mr Kissell says Cooper and Co has done a superb job of transforming the Britomart precinct. “Less than 10 years back it was a place to be avoided. Now it’s arguably the Auckland CBD address or place to be,” he says.

Peddle Thorp’s other Britomart projects have involved design work on the earlier Charter House and on the open space that forms the new Takutai Square.