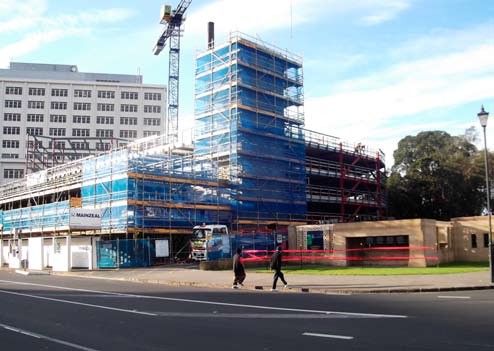 The first of these involved meeting the developer’s requirement of full corrosion protection. The Auckland District Health Board (ADHB) wanted the car park to have longevity, with the cost of maintenance kept low.

The initial choice of decking would have involved propping double multiple spans and leaving an unpainted strip for the welding of through-deck studs. To avoid the extra cost and to achieve complete corrosion protection, it was decided that ComFlor 60 x 0.75, supplied by Tata Steel International, would be the decking system of choice. ComFlor 60 x 0.75 could be installed in unpropped single spans but, in addition, Composite Floor Decks Ltd delivered the decking with profiled end-caps that would allow concrete infill to take place on each side of the flange during the pour.

Meanwhile, the studs were welded to the beams and given a full protective coating, including the flanges, in the course of D&H Steel’s factory fabrication. It’s worth noting that this approach is generally regarded as not essential for all steel-framed car parks. Leaving the top flange unpainted is accepted as good practice since the flange will be covered by the concrete.

Designers who specify that the top flange should be pre-studded and pre-painted will need to factor in the additional stud detailing and workshop costs. With propping of the ComFlor 60 x 0.75 unnecessary, Composite Floor Decks was able to establish repetitive decking throughout the seven-storey structure. The columns were Circular Hollow Sections filled with concrete for fire rating. The primary beams on the perimeter were mostly 310UBs with a few 410 annd 460UBs.

Some custom-welded beams were required where the span was too long and headroom was required below. The secondary beams were made up mainly of 200 and 310UBs with a few 360UBs thrown in.

The second feature that helped win the tender for the D&H team was the future-proofing of the car park. When completed, it will have 403 parking spaces, but it’s been designed so that two more floors for car parking can be added at a future date. The steel structure means that this can be done quickly and easily, with no disruption to the operation of the building. The car park’s concrete roof will become a floor when the time comes.

In addition to providing parking spaces for the general public and some hospital staff, the building will have ground floor retail outlets on Grafton’s Park Road, with commercial offices above these. Future-proofing includes adding on an extra four floors of offices, as the need arises. Again, the roof is concrete but has a sacrificial long-run roof on steel trusses on top of it, pending the addition of the extra floors with steel framing and composite decks.

Historically, car park buildings have won few medals for aesthetics, but there are some exceptions — and this one at 2 Park Road is set to become the next. The ADHB challenged those tendering for this job to design a cladding system that would address the issues of screening, ventilation and aesthetics in a comprehensive solution, cost effectively.

Mainzeal, D&H Steel and Ignite Architects agreed on aluminium as the material, with Ignite developing the detail of the folded panels perforated in tree-like patterns. Fabrication by King Facade was to comply with the aesthetic requirements of the resource consent. The folds prevent visual monotony and the punched holes allow for natural ventilation, thus saving on power consumption. The cost of maintenance will amount to an occasional wash.

It might all seem like plain sailing, but that’s because of the navigational expertise in the D&H drawing office. Senior detailer Guy Jamison described the challenge presented by the secondary steel for the aluminium cladding. “All the connections of the secondary steel to the primary steelwork had to be modelled and detailed early in the project, and because of the complex geometry this could not be done from the architectural and engineering drawings alone,” Mr Jamison says.

“We managed to integrate the architect’s 3-D model into our structural 3-D model, and only then were we able to detail the secondary steel and integrate the connections to the primary steelwork. “We use ProSteel (an add-on to AutoCAD) and it immediately highlighted connection clashes, which I was then able to avoid. It was also apparent that not all of the vertical supports were in the correct locations. However, the accuracy and flexibility of our model enabled us to accommodate the changes prior to producing the shop drawings.

“D&H’s investment in time and attention to detail added value and saved the client money.” Asked if the design of the car park would be suitable for Christchurch, the engineer, Gordan Brkic, director of DHC Consulting, said the design, in principle, would be the same in Christchurch.

“The only thing that would need to be addressed is the building’s bracing, as the earthquake loads in Christchurch are significantly higher than would be expected in Auckland. However, this would affect only four EBFs, a relatively small part of the whole structure.”

Mainzeal project manager Stewart Lovelock says despite the traffic congestion associated with a hospital environment, and the limited amount of setting down space, good progress was made on the car park throughout its construction programme, and will be completed and handed over before the end of December 2011. “Mainzeal has more than 40 years’ construction experience under its belt, “ Mr Lovelock says.

“This enables us to tackle a wide array of projects of every shape and size. We do so with skill, focus and enthusiasm, qualities that D&H general manager Wayne Carson also brought to our weekly project meetings. “These underlined the importance of excellent communications, by means of which Wayne enabled us to steer this project steadily towards its scheduled completion.”