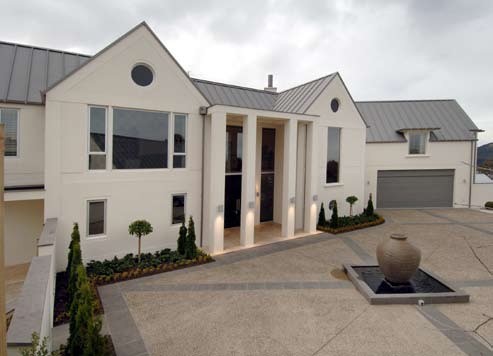 The Platinum Award signifies outstanding success, presented to those companies which have achieved five or more National Awards over the course of the competition. “I was pretty humbled by it too. I’m a great believer that building is in the blood. My father taught me the trade and he would have been pretty proud if he was around,” Mr Oskam says.

JJ Oskam Builders entered its first home in the competition in 1993, and was awarded a National Award in the New Homes $150,000 – $250,000 category for a Dunedin property. It was after winning this award that Mr Oskam realised the potential the competition had for his business. “I saw the benefits of entering the competition straight away, and I could see it as a good way of promoting the business,” Mr Oskam says.

“The Platinum Award shows that we’ve consistently been delivering award-winning homes. Clients old and new seem happy and comfortable that their biggest asset is being built by an award-winning builder,” he says.

Mr Oskam says other builders considering entering the competition should “just do it”.  “Don’t muck about. It’s the best form of publicity you’re ever going to get. You’ll never know how well you can do if you don’t try,” he says. JJ Oskam has entered the competition many times since 1993, winning numerous awards for homes in the Southern region. But Mr Oskam is most proud of the home which won the

Supreme House of the Year in 2007, for a property in Maori Hill, Dunedin. “Houses like that are few and far between in New Zealand,” he says. “It was great having the opportunity to build a house which had a great design and used materials that were absolutely mind blowing. Everyone involved in the build felt the same way, because we were using the best of the best, and it just came through at the end of the day,” he says.

The family home, set on a commanding site with views over Dunedin, features an underground wine cellar, a chef’s kitchen, home theatre and an indoor swimming pool connected to the living spaces by a glazed sun room.

“This elegant, beautiful home has it all, and was a clear Supreme winner. Not a detail has been overlooked,” judges said. “It is obvious those involved in the project forged very close, compatible relationships — the owners, architects, and the builder and his team have produced a remarkable result,” they said.

The team at JJ Oskam Builders is currently working on two homes in Dunedin. “Hopefully we will enter one of the projects in the 2012 competition — watch this space,” Mr Oskam says.

The Awards are made possible through the support of principal sponsor PlaceMakers, and supporting sponsors James Hardie, Gib Living®, Pink® Batts® Ultra® (Tasman Insulation), Nulook and the Department of Building and Housing.

For more information about the competition, go to www.masterbuilder.org.nz.