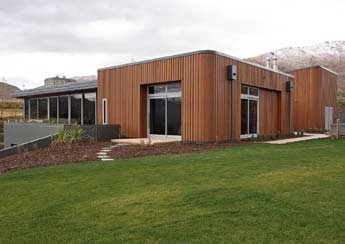 AJ Saville’s homes have been a firm fixture in the House of the Year awards since the Queenstown-based company first entered in 1999. They returned home with third place in the national finals first time round. Since then, entries have been placed in all but one of the following 12 competitions. Their tally includes 19 regional awards, and they have featured among national finalists and award winners 11 times.

Company director Allister Saville says this year’s entry “pushed the architectural boundaries”, and required some creative solutions to incorporate distinctive features such as the rounded corners which utilise vertical shiplap cedar weatherboard. The home has been built to handle the sometimes harsh winter environment in the range, meeting snow load requirements and steeling itself against the elements with thick insulation, slab heating, and accommodation for solar panels and geothermal pumps if desired. Despite the remote location, the home owners remain connected to the house at all times as it has been fully automated, Mr Saville says. “The entire house can be run from the owner’s home in Singapore on an iPad. Or we could be sitting here in our Queenstown office, opening and shutting the blinds, or turning on the TV and changing channels.”

The House of the Year judges have already lavished praise on the home, saying the builders had done a “marvellous job” in creating a home which was “remarkable and architecturally exciting”. Mr Saville says the company’s consistent success in House of the Year has been very valuable, profiling the company’s works. “You might have one winner, and that could be down to the judges, or one house. But when it’s on the consistent level that we’ve achieved, it sets you apart a little.”

When AJ Saville Builder was formed in 1994, they did not set out to focus on high-end builds, but have ended up in something of a “micro-climate”, Mr Saville says. The recognition they have received has been significant in securing further work, with customers often seeking them out. While working on high-end projects brings its own set of challenges, Mr Saville says it is also very rewarding, allowing the builders to use the best possible materials and be involved with some “funky ideas” as well.

Mr Saville says anyone hoping to succeed in House of the Year has to be sure they are presenting their absolute best work, and assembling a like-minded team is crucial. “It’s a team effort. Your attention to detail is one thing, but there’s also the attention to detail of your subbies. You’ve got to make sure everyone is on the same train of thought.” He says success in House of the Year also brings a certain responsibility. “You can’t worry about having an off day. You don’t get any second chances at this level. Everybody expects the best, and once you do put your head out there and set the bar, you’ve got to carry on achieving it.”

The Awards are made possible through the support of principal sponsor PlaceMakers, and supporting sponsors James Hardie, Gib Living®, Pink® Batts® Ultra® (Tasman Insulation), Nulook and the Department of Building and Housing.

For more information about the competition, go to www.masterbuilder.org.nz.