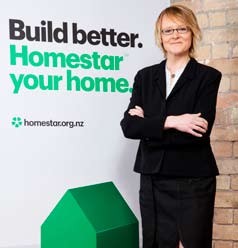 Ms Ferguson was educated in New Zealand, and has lived and worked in the United Kingdom and Ireland. Her career has spanned charities, Crown agencies and local government entities overseas and in New Zealand, including chief executive roles for the New Zealand Gambling Helpline and the Auckland Communities Foundation. Ms Ferguson says she is thrilled to be joining the NZGBC in this new capacity, and bringing her experience in national and international strategy development and service delivery in complex environments to the work of Homestar.

“I have always pursued work that makes a difference in the community, and this role is no different. The potential for Homestar to effect a real positive change to the health and comfort of New Zealand’s housing stock is immense. It’s something I’m accepting as a personal challenge.” NZGBC chief executive Alex Cutler says she is looking forward to Ms Ferguson increasing public awareness of the Homestar rating tool, following its successful launch in November 2010.

“Homestar’s uptake by the public has exceeded our expectations in its first year. Thousands of Kiwi home owners have already used it to find out how their home can perform better, but there are still a million homes in New Zealand that are under-performing in terms of health, warmth and comfort,” Ms Cutler says. “Krista’s leadership will be vital for continuing the NZGBC’s journey towards improving on that, for the benefit of all New Zealanders.”