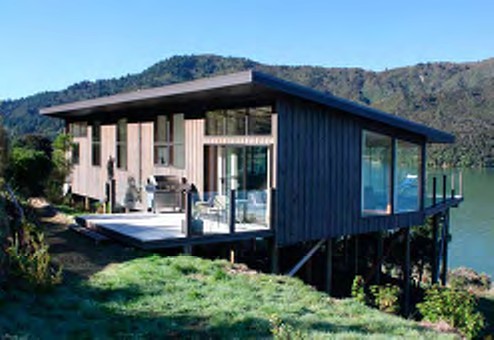 Philip Vile was “blown away” when Glenroy Housing Ltd took out the PlaceMakers Supreme Award and Registered Master Builders 2011 House of the Year, after winning the New Homes $350,000 – $450,000 category. “You wouldn’t expect a house in a more modest price category to take out the Supreme Award, so it caught us off guard,” Mr Vile, a director of the Blenheim company, says.

The House of the Year competition is judged based on a number of considerations, but workmanship is at the top of the list. “It just shows you don’t need a multi-million dollar house to actually stand a chance.” Mr Vile says the awards are fantastic recognition for the Glenroy Housing team, some of whom have been working alongside the company for 30 years. “They’ve beavered away and the quality has gotten better and better every year. After that long, it’s a really good reward for everyone to feel as though they are part of something that has done so well,” he says.

Judges said the builder gave more thought per square metre to this home than any other entry in the competition. The four-bedroom Marlborough Sounds house was an intense build, with extraordinary environmental awareness, unique in its category. “The builder delivered a 131 square metre home with an extremely high level of difficulty,” competition judges said.

Mr Vile says the house had an edge, architecturally. It is a simple house, but is more involved, the closer you look. “The architect kept spotting things that had taken me hours and hours of figuring out. It is detail of workmanship all through the house that seems small at the time, but actually takes hours and hours of work,” he says.

This remote home was built on the side of a hill, with the ground full of rocks and rubble, 65km from Blenheim. “It was a challenging site, and it faced south, but we managed to make it work. We packed a lot of punch for the dollars involved.”

Mr Vile thinks all Registered Master Builders should enter the House of the Year competition if they have a house they’re proud of. “They should definitely give the competition a shot. We’re glad that we allowed the owner to twist our arm to enter,” he says.

Glenroy Housing Ltd joined Registered Master Builders because the directors wanted to be part of an organisation that kept them informed about the building industry. “We didn’t want to be in our own little world. We wanted to know what is happening in the industry as far as changes, technical issues and all of those things go,” Mr Vile says. “It’s great to be part of something where there are other people and you can share information.”

Entries for the Registered Master Builders 2012 House of the Year, in association with PlaceMakers are now open, and will close on February 26. House of the Year will now run separately to the Commercial Project Awards, which instead will begin taking entries on August 6 for a national gala in May 2013.

The Awards are made possible through the support of PlaceMakers, James Hardie, Gib Living Solutions®, Pink® Batts® Ultra® (Tasman Insulation), Nulook, and the Department of Building and Housing.

For information about the competition, visit the Registered Master Builders web site atwww.masterbuilder.org.nz.