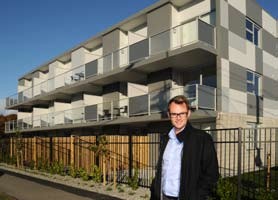 In 2007, Legacy Corporation director Gary Gordon predicted his company would build 1000 residential apartments in Christchurch within 10 years.
The company was approaching the 300 mark when the first of the Canterbury quakes struck. In September 2010, the time of the first big quake, the company had just started a 36-unit development in Cashel Street. Mr Gordon reports there were quite a few interesting shakes during its construction.

Around 10 apartments remain to be sold of Legacy’s pre-quake activity, and now the company has turned its attention to new sites.
Legacy’s Christchurch development manager Mitchell Jefferson says the new developments are likely to be designed within three and four levels and located in or near the central city zone. A Riccarton site has been located for the probable first development.

Mr Jefferson says the demand for apartments has shifted from owner-occupiers to investors who will serve rental customers.
“If the rebuild is expected to last a decade and as many as 26,000 people will be moving here for the rebuild, good quality apartment living will be in high demand,” he says. “Our early evidence is clearly pointing that way.”

He has just leased five fully furnished apartments for an initial one-year term to a corporate which needs to house management staff for the rebuild.
He says insurance is obviously a big point of interest for any buyer, and this is already dealt with when buying into a body corporate. He also says the leases recently signed show a gross return of 8.9%, based on current valuations.
“Because some of the city’s population will be transient and bringing their different skills to the rebuild, this creates a good market for investors. I have been surprised by the interest even now, when I am told the rebuild has hardly started.”

But longer term, Mr Gordon says 1000 apartments are only a part of Christchurch’s housing solution.
“With so much damage to replace I guess our goal could be swallowed up tomorrow. Of course we can’t work that quickly. But we do have established relationships with builders, bank and real estate agents. So we will play a valuable part by re-energising those relationships,” Mr Gordon says.
He says joint venture developments may be possible to speed up the company’s activity.