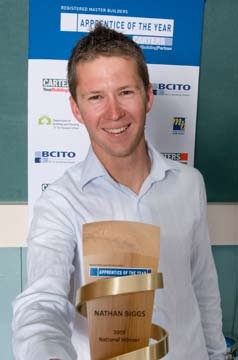 Mackersey Construction construction manager and dedicated apprenticeship mentor Mark Adams says he gets “a real hoot” out of seeing his apprentices progress through the programme.
“You see them on their first day when they arrive at work, and then you see them after four years when you’re handing them their completed certificate in carpentry. The look on their faces is fantastic,” he says.

Mr Adams has been working with apprentices for more than six years, and is well invested in the industry, currently overseeing the work of 11 apprentices.
“I try and have an apprentice in the office at 7am to go through their books. They each come in at least once a month, before they head off to wherever they’ve got to go at 7.30am,” he says.

Mr Adams says the Apprentice of the Year is a valuable experience, and he encourages all his apprentices to strive to achieve within the competition.
“It’s a great way to finish off an apprenticeship. It sets them up for the rest of their lives,” he says. “A lot of them have never been in an interview situation, so it’s a good test run for their future employment, and teaches them how to present things.”
“We expect high standards from our guys. They’re encouraged to set goals to get into the competition right from the day they’re signed up. We say this is what’s going to happen in three years’ time, and this is the level you’re going to get to. We want them to be in the top three of the Apprentice of the Year competition.”

Last year Mackersey Construction had three apprentices in the top eight, with two being placed second and third for the region.
Mr Adams says, as an employer, the fact that an apprentice has placed in the competition is a clincher.
“I’d say, wow, let’s give this guy a go.”

Mackersey Construction has had success with its apprentices in Apprentice of the Year every year since 2007. In 2009, Nathan Biggs won the East Coast regional competition before taking out the top prize at the national finals.
Mr Adams says Nathan, who now owns his own construction company in London and is working as project manager on multi-million dollar jobs, was a standout.
“Nathan was mature, had great people skills, and he was clever at what he did.”

Mackersey Construction has three apprentices entering this year’s competition — two in Hawke’s Bay, and one in Wellington.
“The goal is to win both regions!” Mr Adams says.
The company’s intensive training programme has mock interviews and site visits mimicking the style of the competition, so the apprentices are well prepared by the time they take part.
“We use all of our resources to make sure they are prepared for the competition. We put as much effort as we can into it, because we believe the more effort that goes in the more recognition they’re going to get.”

Entries for the Apprentice of the Year are open until June 28, 2012. For further information, or to download an entry form, go to www.apprenticeoftheyear.co.nz. Entry forms can also be collected from Carters stores nationwide.

Apprentices, employers and those young people aspiring to be a part of the construction industry are encouraged to join up to the Facebook page at www.facebook.com/apprenticeoftheyear.

The Apprentice of the Year competition is made possible thanks to principal sponsor Carters, the Registered Master Builders Federation, the Building and Construction Industry Training Organisation (BCITO), and supporting sponsor the Department of Building and Housing.