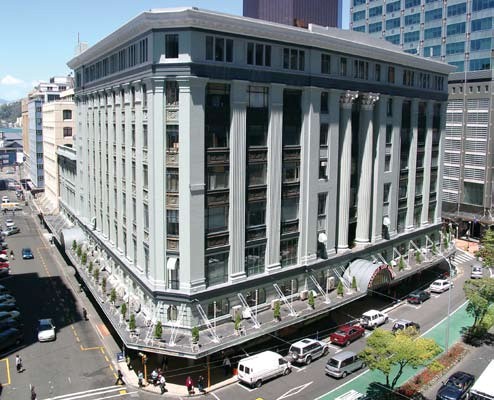 Our geologists have told us over the years that for many of Wellington’s fine buildings and their occupants the threat of earthquakes is real.
After considering their options, some owners decided to raise the earthquake protection of their buildings to meet or exceed current code requirements. Others opted for the minimum levels required by government legislation while others delayed taking action until the latest acceptable deadline.

To its credit, Wellington City Council has proactively encouraged earthquake strengthening to be undertaken sooner rather than later. Then came Christchurch, and Wellingtonians saw that their council had been right.
At 179-193 Lambton Quay, the Harbour City Centre was originally built for the Drapery and General Importing Company (DIC) in 1928. In those days, building codes for earthquakes didn’t exist. Now they do, and the Harbour City Centre is a Category 2 Heritage Building.

Its current owners, Kirkcaldie & Stains Ltd, engaged consulting structural engineers Dunning Thornton Consultants Ltd to assess its seismic strength.
“For its day, this iconic, semi-art deco style building had been well designed and constructed,” Adam Thornton says.
“The original frame, shipped from the UK, had been fabricated in structural steel. Its concrete-encased steel columns were anchored to concrete foundations that extended down to the bedrock.
“However, predating both the Murchison and Napier earthquakes, the building would not have been specifically designed for earthquake loading.”

In the 1970s, engineers assessed the building as being short of earthquake protection requirements applicable at that time. Although there was no legislation to compel action, the owners took the advice of their consultants and commissioned strengthening to be done by the insertion of inverted “V” braces into the existing steel columns and beam frames.
“Commonly referred to as “K” braces,” Mr Thornton says, “these formed concentric bracing in that the members came together at the node at the top of the inverted V.
“This left the structure with a potential vulnerability in that the braces were prone to non-ductile buckling if their compression capacity was exceeded during an earthquake. The structure lacked the resilience required by current codes.”

After an Independent Evaluation Process (IEP) assessment by the Wellington City Council indicated that the structure was potentially earthquake prone, Dunning Thornton conducted extensive analysis and modelling of the structure and compared the likely structural performance with that required by current codes.
The analysis confirmed that it was, in fact, below the 34%NBS (New Building Standard) and, thus, was adjudged to be earthquake prone.

Rather than delay for the 10 or even 20 years allowed by the WCC Earthquake Prone Buildings Policy for achieving compliance, the owners took immediate action.
“One option for the Harbour City Centre was to remove the braces and re-do the strengthening. However, our analysis work suggested that the K-frame braces would provide adequate performance if they could be modified to allow ductile yielding both in tension and compression, preventing the onset of buckling,” Mr Thornton says.

“The modification was achieved by inserting hysteretic flexural dampers. These we designed to allow axial, ductile yielding in the braces that will give the required post-elastic performance.
“The damper is designed to yield at a pre-determined load level, limiting how much load comes into the brace while, at the same time, preventing the brace from buckling. By absorbing the energy generated by the ground motion, the dampers dampen the response of the building and enable it to avoid catastrophic structural damage.

“Our job as structural engineers is to ensure that the other primary structural elements within the building have capacity in excess of the damper yield loads. It is this hierarchy of strength that avoids yielding in elements which have not been detailed for post-elastic performance.”

Fabricator and steel erector Malcolm Hammond, managing director of Wellington-based MJH Engineering Ltd, says the damper joint wasn’t laborious to make.
“It presented a challenge, certainly, considering that throughout the building we had 50 four-pin and 54 six-pin assemblies,” Mr Hammond says.
“We used a test-bed from Kerf Ltd and adapted it for use on site. Our CNC profile cutter we bolted to the universal columns (UCs) to cut the slotted holes — all fairly simple using our standard Sigma Nest software.

“As for the rest, we were pleased for safety reasons that work-in-progress areas were strictly isolated from the ongoing retail activities. The tenants moved to different floors and LT McGuinness Ltd, the main contractor, simply insisted that all subcontractors met their staging deadlines.
“Not everyone was happy with having to work through the nights, but this also afforded us the freedom we needed to break out concrete and weld gussets to increase the bearing capacity of the older steel joints dating back to the 1980s.
“Being indoors, we were able to take full advantage of Metal Inert Gas (MIG) welding, which uses CO2 as a shielding gas and, of course, is faster than arc.”

Once again, steel has proved itself not only by its longevity, but also by its adaptability. The Harbour City Centre has been given a new lease of life, one that at some time in the future may even see its floor area expanding, vertically!