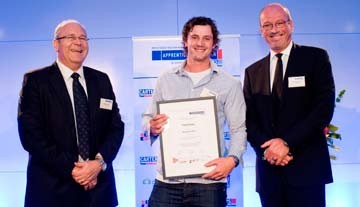 As Christchurch builders continue the search for skilled tradespeople to help with the impending demand of rebuilding the city, there is a growing trend for builders and apprentices to move to the city in search of career opportunities.

Tom Evans, 22, the Central North Island Registered Master Builders Carters 2011 Apprentice of the Year winner, has already jumped at the chance to help mend the broken city.
The decision to move away from home was not an easy one for Tom.
“Leaving my family, friends and previous employer behind wasn’t easy, but change is always good. I see no end to the opportunities available for a young builder looking to forward a career in Christchurch. I’m just looking forward to seeing the city up and running to its full potential again,” he says.

Tom’s employer, Richard Gibb of HRS Construction, says that with an increasing workload the company needed to expand to meet the needs of its clients.
“Tom mentioned he was keen for a challenge, so we jumped at the chance to take him on. The fact that he was in the [Apprentice of the Year] competition told me he must be good to win the regional finals.”

Tom started his career in carpentry in 2007 when he was in Year 13 at Feilding High School, and took part in the BCITO’s Gateway Programme, which includes theory learning and practical application.
He finished his BCITO managed apprenticeship within four years, participating in the Apprentice of the Year competition in his final year, winning the Central North Island region competition before competing against nine other apprentices from around the country in the national final.

“I can’t see myself in any other career path. Building is challenging, rewarding and very progressive if you’re willing to work hard.”
Tom is now working as a junior foreman, running small projects for HRS Construction in Christchurch.
“I wasn’t living in Christchurch during the big quakes, so working on the damaged buildings has been very informative. Seeing the damage that has been caused and hearing the stories behind it all have been a real eye opener,” he says.

Mr Gibb says Tom made the step up quickly, and has the potential to go far.
“He does a very good job, gets on well with clients, understands the process of how to do the job, and has a team working with him that listens to him and does what he asks of them.
“Tom has self-drive and is keen to expand his knowledge, and we will be there to offer the opportunities to facilitate this.”

Tom says he is still learning, and adapting to a new city — especially one such as Christchurch — has been a challenge.
“Everything is new to me — new city, new people and new challenges. But I’m getting the hang of it now, and have been given new responsibilities to get stuck in to,” he says.
“The opportunity that I have been given by Richard and HRS Construction is huge. I’m grabbing it with both hands and making the most of it.
“Right now my goal is to keep working hard and to progress through the company, getting involved with the rebuild the best way I can. I’m really excited about the future in front of me.”

Entries for the 2012 Apprentice of the Year are now closed, and regional events will take place throughout September.
The Apprentice of the Year competition is owned and managed by the Registered Master Builders Federation (RMBF), sponsored by Carters, partnered with the Building and Construction Industry Training Organisation (BCITO) and supported by the Department of Building and Housing.

Apprentices, employers and young people aspiring to be part of the construction industry are encouraged to “like” the Apprentice of the Year Facebook page, and to join the conversation at
www.facebook.com/apprenticeoftheyear.