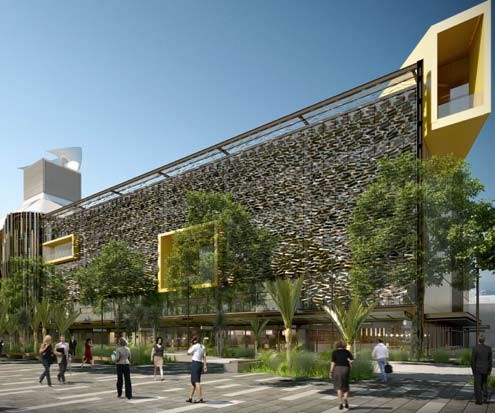 ASB North Wharf occupies sites 22 and 23 in Wynyard Quarter on Auckland’s waterfront.
Te Wero Lane, a prescribed public lane extending from Jellicoe Street to Madden Street, is the central component of the public realm within the site, and creates the pedestrian connectivity with the corporate realm. Bridges span the glass-enclosed lane between the two buildings.

The design of ASB North Wharf has been undertaken as a fundamental building block of Auckland’s Wynyard Quarter. Australian architects Bligh Voller Nield Architecture (BVN), in association with Jasmax, developed the concept in response to the brief provided by the bespoke requirements of ASB and the developer, Kiwi Property Management Ltd.

BVN practice director Brian Clohessy says the building is driven by publicness, not conventional architecture.
“The design team has worked from three principles — sustainability and the ethical development of place, the seamless integration of public and corporate space and activities, and architectural expression,” Mr Clohessy says.

“The major design component was to naturally ventilate the contiguous volume of the building. To enable ventilation, a “stack effect” or “thermal chimney” was created to force clean fresh air through the façade by manually operable windows.
“The expended air from human occupation is then drawn into a central atrium and upwards into the funnel from which it is expelled in the pressure differential caused by the prevailing wind across the roof.”

Mr Clohessy says the creation of an environment that supports and nurtures human activity and puts wellness of the individual and the community was at the centre of the design team’s decision making.
“Wellness is another way of saying taking care of the health of human beings — it means fresh air in the workplace, it means daylight to work by, it means materials that are not toxic, and it means creating public and private spaces that are humane, accessible and safe.”

The brief was for a building with an unencumbered floor plate, which necessitated column-free areas and large spans. The aspiration to have daylight penetrate deep into the building generated a staggered atrium in Building 22.
In collaboration with consulting engineers Buller George Turkington Ltd, BVN and Jasmax developed sculpted columns to support the slab edges in the staggered atrium. The column form is heavily influenced by the tapered deck cranes on the boats that are frequently docked at North Wharf.

Karl Dawe of Buller George Turkington provides the consulting engineers’ perspective: “Building 22 is six suspended floors plus roof, and Building 23 is seven suspended floors plus roof/louvre box structure.
“The primary structure is reinforced concrete moment resisting frames in both directions, with structural steel playing an important role in both buildings.
“In Building 22, the structural steel ‘trees’ consist of columns that transition to beams over three levels and 17 metres. They support gravity loads from the floors at levels five, six and seven, and also participate in the lateral load resisting system.”

Unique features in Building 22 include:
• Fabricated Steltech members of tapering depth and varying width, as well as varying flange and web thicknesses.
• Substantial steel plating at column/beams joints, ie, where post-tensioned reinforced concrete beams connect to the steel tree column.
• Full-strength butt welds at a number of locations done on site.
• The overall size, mass and function required innovative construction methodology worked through with the main contractor Fletcher Construction Company (FCC) Ltd.
• Large 600mm deep atrium trimmer beams line the atrium at levels five and six, in particular at the curved junctions at the western end of the atrium.
• The steel support structure for the north sunscreen.
• The atrium feature stairs, clad for the long term but with interesting geometry and challenging fabrication.

“There are 12+ bridges linking buildings 22 and 23 across Te Wero Lane,” Mr Dawe says. “The bridges have been designed using 360UB beams. These are bolted to Building 22 with a fabricated plate corbel on Building 23 to allow for 350mm of seismic movement in both directions.
“The Te Wero facade connecting the two buildings is supported by more steelwork. In Building 23, one of the main structural steel elements is the seven-storey structural steel lift shaft.
“Designed for three lifts, this is comprised of 150UC columns, and has all beams left exposed. At level eight, the roof structure and louvre box are in structural steel.”

The curving roof structure presented a challenge because of the need for absolute accuracy in the angles of thousands of cleats.
Grayson Engineering’s solution was eminently practical — pre-assemble the entire structure on one of the company’s three large shop floors.
Grayson site manager David Allan says when the roof arrived on site, it had been disassembled into three sections – the core with four main columns and K-braces, and the East and West sides.

“Having first proved that everything fitted, we simply bolted it all together like Meccano,” Mr Allan says.
“We used the same approach with the louvre box, or cube, as we call it. The weight of the lift was governed by the crane capacity.
“In fact, construction on this project went very smoothly, mainly because of the thinking and planning done by the architects and engineers, and the meticulous detailing done by our drawing office, Cadtec Draughting Ltd.

“Fletcher Construction project director Alan Gray held regular meetings to ensure that the phases of the programme were not only correctly sequenced in terms of buildability but also safe, something we as the steel erectors certainly appreciated since we are usually the first to work at height and create safety levels for those that follow.
“I know everyone on the Grayson Engineering team found this project tremendously interesting, challenging and very rewarding. After all, we knew we were constructing a building that was outside the square.”