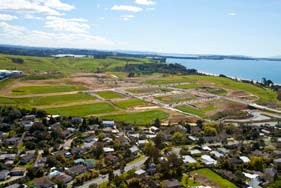 Developed by Todd Property Group, Stage 1 sections with an average price of $450,000 have sold out. A further three stages will be released for sale early in 2013, with the first residents expected to arrive late next year. While sections are being snapped up, 13 show home builders are busy planning New Zealand’s first “show home street”, which will be lined with 14 custom-designed homes set to open in mid-2013.

The 18-stage, 162ha development will eventually contain approximately 2500 dwellings, but much of the site will be open space, including extensively landscaped areas, parks, reserves and newly-planted wetlands. The development of the site was originally challenged in the Environment Court by environment groups and residents who wanted the area to be retained as parkland adjoining the existing Long Bay Regional Park.

Todd Property Group managing director Evan Davies says because of the intense scrutiny the development was under, it was “terrifically important we responsibly reflected those concerns”. He says protecting the natural beauty and allure of Long Bay has been paramount in developing the site. “Long Bay is one of Auckland’s most beautiful beaches, with tens of thousands visiting each summer. A significant amount of land will remain dedicated to the regional park,” Mr Davies says.

Ahead of the development’s opening, architectural finishing touches were made to the Awaruku Bridge and “cattle stop” entry marker, inspired by the land’s farming heritage. Within the development, the new Long Bay Cafe offers panoramic ocean views, and the sales and information suite features a large 3D model of the planned site.