Home Apprenticeships You’d be silly not to enter Apprentice of the Year, runner-up says 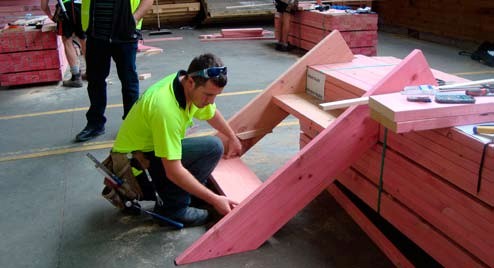 The 25 year-old carpentry apprentice, who is employed by Mackersey Construction, entered the competition after Mackersey construction manager Geoff Hall encouraged him to take part. He says he is extremely grateful to Geoff for his support, as the Apprentice of the Year experience was “invaluable”. “In my job I have always worked under tough deadlines, so the pressure was never going to be a problem,” Adam says.

“What I found really challenging was going into the practical and having no idea what to expect. It’s like going into an exam — you try to cram all of your knowledge into your brain, and it isn’t until you get the piece of paper in front of you that you know what you’re up against. “It was really testing, but it was a great experience. I would encourage any apprentice to enter Apprentice of the Year — you’d be silly not to. You’ve got nothing to lose and everything to gain. At the end of the day, you might surprise yourself.”

Adam was originally motivated to undertake an apprenticeship after seeing the opportunities offered by the construction industry. “When I left school I wanted to go out and stand on my own two feet, starting with making a living for myself,” he says. “Getting involved with the construction industry meant I could start making an income and doing something that I enjoy, rather than going to university. The opportunity to start my career straight out of school was a big drawcard.”

Adam’s work at Mackersey Construction has seen him relocate from the Hawke’s Bay to Wellington, which he says has been a huge learning curve. “By making the move to work on Upper Hutt College’s redevelopment in Wellington, I’ve definitely learnt a whole lot of new skills. I feel so lucky to have been given this opportunity — if something else like this came up I’d do it in a heartbeat.” Adam was stoked with the $2000 tool allowance he received as a prize for Apprentice of the Year, and is looking forward to his Outward Bound trip with other winners in September. “One of the prizes I won through Apprentice of the Year was an Outward Bound course, which is an opportunity for all the boys who were in the national competition to get together again. It’s a fantastic prize to win.”

After attending the House of the Year event, Adam has decided the House of the Year competition is something for him to aspire to. “I’ve got the itch to get back involved with residential building, as opposed to heavy commercial. In residential, the work is much more refined, and that high standard is something to aspire to achieve at the end of a job,” he says. “Once the industry calms down and I’m back in the Hawke’s Bay, I’d like to look into working with residential building.”

The national Apprentice of the Year final, which has been taking place in Wellington, will this year be in Auckland in October. Apprentices, employers and those young people aspiring to be a part of the construction industry are encouraged to join up to the Facebook page at www.facebook.com/apprenticeoftheyear.