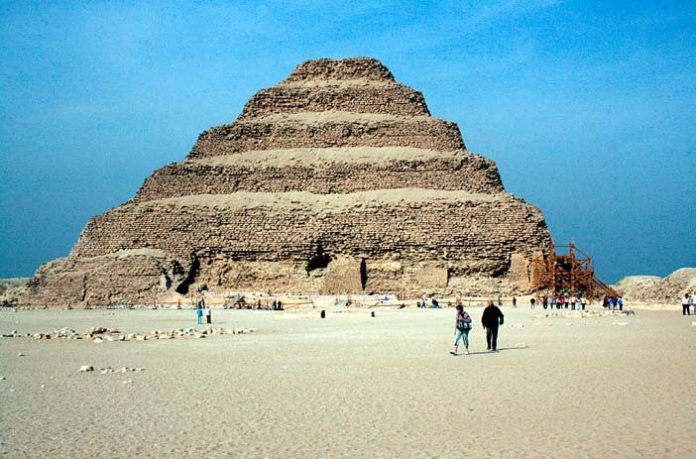 Some 4600 years ago, Imhotep designed and supervised construction of the world’s first large-scale, cut-stone tomb. It was Egypt’s first pyramid. Today it still stands as the world’s oldest masonry structure.

Imhotep was a genius and polymath. He multi-tasked. He was not only chancellor to the Pharaoh Djoser, but doubled as high priest of the sun god Ra. In many people’s books, he is regarded as the first architect, first engineer and first physician.

Egyptian pharaohs were in the habit, while still alive, of arranging for a suitable tomb where they might be reborn throughout eternity. Up until Djoser’s time, pharaohs were buried in mastaba — flat-roofed, rectangular structures made from mud bricks.
Djoser felt he deserved something more impressive, and asked Imhotep what he might come up with. The result is the necropolis of Saqqara to the north-west of the city of Memphis. This vast mortuary complex is dominated by the Pyramid of Djoser.

The pyramid consists of six mastabas of decreasing size stacked one on top of the other to form a series of steps. When completed it stood 62 metres tall on a 109 x 125m base, and was clad in polished white limestone.

Importantly, it was constructed of blocks of cut and dressed stone using techniques devised by Imhotep.
There is more to Djoser’s tomb than just his pyramid. For starters, it is surrounded by a wall of limestone 10.5m high and pierced by 14 doors. Thirteen of these doors were solely for the use of the king in the afterlife. Only one might be used by the living. It leads to a roofed colonnade which is formed from stone pillars carved to imitate bundled plant stems, and capped by limestone blocks shaped as tree trunks. At the end is a hall formed from 20 pairs of 6.6m tall limestone columns.

Beyond is a large courtyard that separates the pyramid from the South Tomb. The latter possibly housed the king’s organs, as opposed to his mummified body.
A 30m passageway hewn from the rock leads to a pink granite burial chamber and then to an inner palace decorated in blue faience, a sintered-quartz ceramic. Here, Imhotep’s most skilled artisans executed their finest art in the darkest, most inaccessible places in the complex.
Outside the wall, the tomb complex is totally surrounded by a 750m long, 40m wide trench carved deep into the underlying rock. Much of the rock used to construct the actual pyramid came from this trench.

As with all pyramids, considerable debate continues over how the various heavy chunks of dressed stone were raised from the trench and placed on the pyramid.
A 6km maze of tunnels is carved in the rock beneath the pyramid. This leads to the burial chamber proper that is built from four courses of well-dressed granite, its single opening sealed with a 3.5 ton block after the burial. Offerings and family members, including assorted wives, could be entombed elsewhere in the maze.

To construct the pyramid, let alone the entire mortuary complex, would have necessitated a major social upheaval. The size of the undertaking alone would have been labour intensive, as would the use of cut stone as opposed to relatively easily produced mud brick.
One consequence would have been the removal of a large portion of the Egyptian work force from the essential harvest for a period of years. These people would still have had to be fed, and that would have required an agricultural revolution. Imhotep managed the whole kit and caboodle. His pharaoh’s tomb was all that mattered.

After 4600 years the pyramid is showing its age. Apart from being frequently robbed, its condition is not helped by having been hit by an earthquake in 1992.
A team from Cintec in Newport, Wales, has been called in to rescue the landmark. This is the mob who sorted out Windsor Castle after the 1992 fire, as well as bolstering that dicky bridge in Delhi ahead of the last Commonwealth Games.

The contract is worth £1.8million. Cintec is using self-inflating, water-filled bags to prevent the collapse of damaged ceilings beneath the pyramid. They will then shore up the pyramid’s central chamber with stainless steel reinforcement anchors.