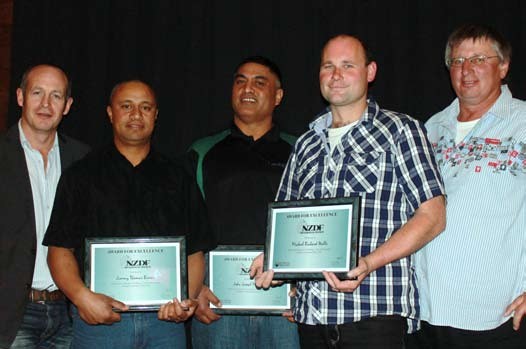 NZ Drillers Federation president Iain Haycock says while they had planned to only present one award, they could not choose between the three winners.
“The calibre of the group was exceptional, and all three of the students demonstrated a level of competence that made it too difficult to select just one. It is unusual to be in that position,” Mr Haycock says.

The three students are Jimmy Brown from Rotorua, John Makakea from Auckland and Mike Walls from Motueka.
Mr Brown is now the driller operator for McMillan Drilling Ltd in Christchurch, Mr Makakea is the driller for LandTest‘s sonic rig in Christchurch, and Mr Walls is working for CW Drilling and Investigation Ltd in Motueka.

“Because of their backgrounds they have all progressed fairly quickly in the industry and, as hoped, a lot are working in Canterbury,” she says.
Award-winning student Mr Makakea had an army background, and says he was looking for a new challenge.
“I was spending too much time in front of a computer and wanted to get back into working outside,” Mr Makakea says.
“I now work with some really passionate drillers, and am one of two running a sonic drill rig for LandTest. It is a really great industry to get into,” he says.