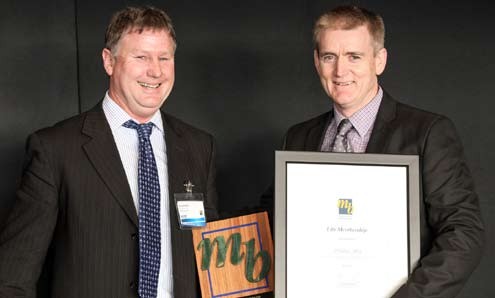 Registered Master Builders Federation president David Fabish was thrilled to present a Life Membership to Michael Fox, a long-standing contributor to the organisation both locally and nationally, at its recent AGM.

In 2004, Mr Fox’s interest in politics drew him to Victoria University where for the following 18 months he took papers in political science.
This stood him in good stead when, in 2003, he started his involvement with the Registered Master Builders Federation as junior vice-president, becoming vice president in 2004 and national president a year later.

In 2007 Mr Fox was elected as chairman of the Federation Board. He stood down from this position in 2012, and retired from the RMBF Board after nine years’ service.
He was also appointed as a Master Build Services Board director in 2006, and still holds that position today.
Mr Fox has been involved with other construction-related organisations, including BRANZ, where he was a director on the BRANZ Board from August 2007 to August 2011. Also in 2011 he was appointed a member of the Construction Strategy Group.

Reflection of high regard
This was an individual appointment and a reflection of the high regard in which other key industry individuals value his leadership.
It goes without saying that he has been a strong advocate and supporter for Registered Master Builders, at the Federation and Association level. He has been on his local Association executive and Federation Boards for a total of 23 years — and counting.

Mr Fox has been heavily involved in advocacy work for Registered Master Builders internally and externally, particularly with central Government and wider.
He is highly respected by his peers, government officials and Ministers, and his tireless efforts to make the construction industry a better place to work are second to none.
Mr Fabish said the Federation could not think of a worthier recipient for the honour of a Life Membership.