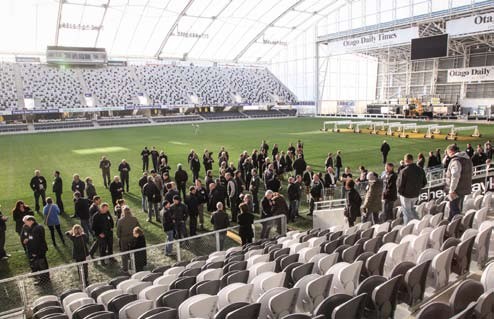 Dunedin turned on picture perfect winter days for the Registered Master Builders Federation annual conference at the Forsyth Barr Stadium in July.
Themed “Keep Calm and Carry On”, attendees were treated to what is being touted as the best speaker line-up seen in a very long time, and backed up by memorable social events in historic places.

Once again the conference opened with an address from Minister for Building and Construction Maurice Williamson. Alway grateful for his ongoing support, Minister Williamson is somewhat of a fixture at the RMBF Conference.
Builders and sector representatives always enjoy his honest, up-front approach and humour, while bringing us up to date with the Government’s plans for the industry.

This conference saw a slightly different approach to the educational sessions through the Carters Seminar Series which ran across the Thursday and Friday. Topics covered were:
• Building Your Business, by Richard Carver, RMBF director: A particularly well received session about achieving what is important to you out of your business.
• The Building Act, by Warwick Quinn, RMBF chief executive: Bringing delegates up to date on the impending changes to the Act and how they will fundamentally impact on all building businesses.
• Health and Safety, by Warwick Quinn, RMBF chief executive and Marcus Nalter, MBIE: Covering the recent work undertaken by the Construction Safety Council to provide a structured framework to H&S, as well as the charter recently launched by MBIE, and an update on the Falls from Heights work currently in progress by MBIE.
• Lean Building, by Scott Sedam, TrueNorth Development Inc: In New Zealand from the USA, Mr Sedam imparted his extensive knowledge on building smarter and leaner by demonstrating how to improve product, process and profit without compromising building supplier and trade relationships.

Also, throughout the two and a half days a stellar line-up of speakers proceeded to keep the theme alive with their real life stories of meeting challenges through perseverance, hard work and, at times, failure — ultimately leading to success. On day one they were:
• Murray Thom (sponsored by BCITO): From school drop out to managing director of CBS Records New Zealand, Murray also introduced personalised number plates into New Zealand, and went on to create the Great New Zealand Songbook and the Great Australian Songbook among other things.

His high energy and amusing presentation left delegates feeling positive about the future and, as he puts it, ready to “live each day in order to receive a standing ovation!”
• Sir Ray Avery (sponsored by Mitre 10): Proud Kiwi, Sir Ray took us from his less than humble beginnings in Britain through to his world-leading approach to global healthcare. Within 24 hours of arriving in New Zealand he knew this was the place for him because “Kiwis don’t understand the word impossible!”

Basing an extremely successful career on the power of observation — seeing what’s really needed and then going about achieving it — Sir Ray overtly counts the days he has left, and consciously goes about using every one of them to make a difference.

A bit rebellious by nature, his witty delivery of “his days so far” had the delegates in stitches, without losing any of the seriousness of what he’s about — changing the world!
Day one was wrapped up with the ITM Welcome Function which started with a departure from the historic Dunedin Train Station on the Seasider, and up the Pacific Coast to the Waikouaiti Hall for a good old Southern hoedown!

Leaving early enough to take in the fantastic scenery with the carriages decked out in ITM bunting, the outstanding hosts from the Otago Registered Master Builders Association kept everyone fed and watered on the journey. And the entertainment at the hall (The Possum Pickers!) had folk up on the dance floor in no time.
Day two kicked off with a presentation by Andrew Holmes of Hawkins Construction about the creation of the Forsyth Barr Stadium (sponsored by Telecom).

Mr Holmes took delegates through the process of bringing a New Zealand-first in stadia to life in a tight time frame to meet the requirements of the Rugby World Cup in 2011. The presentation was then followed up with a tour of the stadium — with some delegates managing to get out on to the pitch before being “guided” back off the hallowed turf to the sidelines.
Closing out day two was Kevin Biggar, extreme adventurer and co-host of the current First Crossings series (sponsored by NALCO).
Going literally from the couch to what some might call crazy adventures across oceans and frozen continents (and against his Mum’s wishes), Kevin’s achievements were inspirational, and delivered with good humour and poignant messages.

Key to his, and his adventure partner’s, success was meticulous planning and, in particular, preparing for the “bad days”. This is precisely how they achieved their win in the trans-Atlantic rowing race (the time they gained on a bad weather day was the exact time they won the race by in the end) — basically they “kept calm” and carried on.
That evening saw the PlaceMakers Braveheart Gala Dinner at the legendary Larnach Castle. Piped in on arrival in true Scottish fashion, all 300 delegates were free to roam throughout the castle before official proceedings commenced.

Some professed sensing the ghost of Kate Larnach in the piano room as the temperature dropped in there — one keen observer (clearly not buying into the haunted room thing) reckoned it was only because that room hadn’t been double glazed yet like most of the others!
Either way, a fantastic night was had by all, complete with an enthusiastic haggis ceremony and fantastic band to dance the night away. Graham Coe’s Queen’s Honour was also recognised at an event with so many of his peers in attendance.

Leading into day three of the conference and AGM was an address by Sir Graham Henry (sponsored by BRANZ). The delegates were treated to a no holds barred, honest account of the good, the bad and the ugly of his career so far.

Delegates heard about the fundamental changes to the All Blacks coaching approach required to get them to that nail biting final in 2011 — an approach that was not too dissimilar to Kevin Biggar’s, as in “prepare for the worst”, which is exactly what happened to the team with the injuries sustained.

Key to Sir Graham’s session was man management and team development — including some gems for delegates to take away. The audience also discovered why he’s called Ted!
Closing the conference for 2013 was the RMBF AGM where a Life Membership was bestowed upon Michael Fox, as well as recognising Kevin Stanley who is soon to stand down as MBS chairman.

The contribution of both of these gentlemen to Registered Master Builders has been outstanding and greatly appreciated.
It was a very successful conference that couldn’t have happened without members and sponsors — a big thank you to you all.

Next year sees the Conference heading to the Wairarapa.