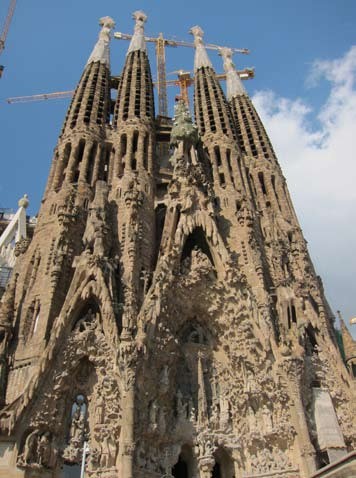 Think of Barcelona, and other than the 1992 Olympic Games (especially the theme song performed by Freddie Mercury and Montserrat Caballé) most first-time visitors will think of architect Antoni Gaudi and his yet-to-be-completed Sagrada Familia Cathedral.

In a style you might describe as Art Nouveau on steroids — although purists will say Gaudi’s style is at best a close relative to Art Nouveau — the building attracts more visitors than any other tourist site in this very appealing coastal city of many outstanding architectural gems, both old and new.
To give Gaudi his due, he was clearly supremely talented and single-minded, but his style is also likely to top some people’s best and worst examples of 19th and 20th Century architecture.
He arguably only managed to have his radical designs realised due to the support of his wealthy and influential patron, Catalan industrialist Eusebi Güell. But love him or hate him, Gaudi’s buildings have a powerful impact on all who experience them.

Rather than being of any particular style, he and his work are perhaps best described as genius inspired by nature. His approach is certainly not quiet and unassuming, rather like entertainer Liberace, who once said: Too much of a good thing is wonderful.
Gaudi was a talented artist and draftsman. However he preferred, like Geary with his earlier designs for the Guggenheim Museum in Balboa, to develop his projects through the use of elaborate models. The mind boggles how much more elaborate his buildings might had been if he’d had access to modern computer technology.

While known in his prime as very much a man about town, he became antisocial in later life. In a strange parallel with architect Louis Kahn who, in more recent times was discovered dead and apparently destitute in Penn Station, New York, Gaudi was struck by a tram in 1926.
Because of his rough appearance and dress he was thought to be a beggar, and died shortly after through benign neglect.
Unlike Gaudi’s easy-to-find and well-signposted buildings, an arguably more important building architecturally is tucked away in a quiet corner of the exposition area of the city, a short walk from the Espanya Metro Station.

This is the Barcelona Pavilion, designed by architect Ludwig Mies Van Der Rohe as the core of the German exhibit at the 1929 International Exposition.
Much of Mies Van Der Rohe’s later work was produced after he immigrated to the United States, but he never changed his central dictum of less is more. The phrase is borrowed from a Robert Browning poem, but succinctly sums up his approach to design in general and structure in particular.

To show how far his view of architecture differed from Gaudi’s, Mies once tellingly said: “I don’t want to be interesting, I want to be good.”
The building was constructed just in time for the 1929 exposition and, unfortunately, was dismantled shortly afterwards. So the building you see in front of you today is a painstakingly recreated copy organised by a group of Spanish architects in 1983-86.

As many famous Japanese temples have been rebuilt on numerous occasions after fire or tempest — and suffer no less importance from that fact — the building remains a masterpiece of modernist, International-style design of the 1920s and 30s — as fresh and relevant today as it was 85 years ago.
A telling aspect of the project was that Mies Van Der Rohe managed to persuade the German organising committee that the building should be the exhibit, rather than the building being the container of exhibits.

This ensured that its subtle but rich simplicity — the materials used were all of the finest, most exquisite quality — was kept at the forefront, without having to compromise to meet various exhibitors’ practical needs.
Every aspect of the project was focused on the building and its very simple contents — a single nude statue by George Kolbe and three of the architect’s now iconic Barcelona chairs and footstools.

There is no way of telling today whether Mies saw this as his calling card for future projects, perhaps in a similar way to Frank Lloyd Wright’s design for Falling Water after such a long, dry spell in commissions. But as the centrepiece of the German exhibit it certainly did his reputation no harm.
After all, there were probably not many commissions around in pre-Third Reich Germany for architects focused on simplicity rather than Teutonic monumentalism.

Together with the Farnsworth House in Illinois and perhaps the Lake Shore Drive apartments in Chicago, the Barcelona Pavilion is today seen as a supreme example of his quiet, spare and elegant approach to architecture.
There might be a lesson here for some of the more recent architectural edifices which can tend to shout for attention.

Deliberately placed
The building was deliberately placed on a low podium so that visitors approached it up a short flight of stairs and then had to turn 180° right to enter the first of the building’s spaces.
The building is all about flow and vista, with new spaces slowly revealing themselves as you progress. Many spaces are unrestrained by exterior walls, but for those that are, the glazing is minimalist and virtually invisible.

The flat, almost unrealistically thin roof plane is supported on a series of chrome-clad cruciform steel columns and a number of carefully positioned vertical planes — both marble-clad and one clad in spectacularly patterned red onyx.

These cannot be accurately described as walls as they neither block nor contain the visitor’s view, but merely deflect it forward.
The final elements in experiencing the building are water and reflection. Shallow pools are used, both in the large external courtyard, reflecting and accentuating the roof plane, and in the sculpture courtyard, with its much photographed reflected view of the George Kolbe statue.