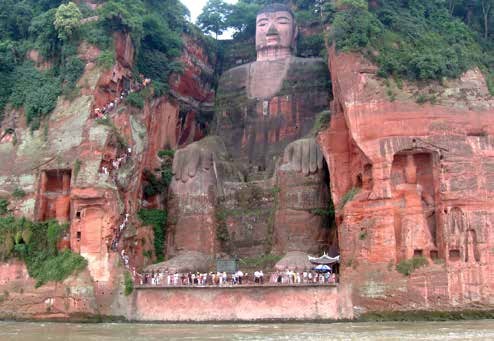 While watching a documentary called Rediscovering the Yangtze, I found — as a geologist in a former incarnation — the geomorphology mind blowing. There was much I had never seen before. But that experience was eclipsed by the superb aerial footage taken in and around the Leshan Buddha.

I had long been vaguely aware of this colossus, but seeing its monumental size and superb detail in close-up shots left me pondering how on earth the Chinese managed to construct it some 1200 years ago. It shows what the human species is capable of given the right motivation. And it all started back in 713 AD.

A monk named Haitong had the notion of carving a Buddha in the precipitous cliffs at the triple junction of the Minjiang, Dadu and Qingyi rivers in southern Sichuan province. This was an important waterway but the extreme turbulence of the waters at this complex confluence proved a bane to shipping. Haitong was convinced Buddha could calm the torrent. The devout monk was equally sure a small Buddha just wouldn’t do the trick. So he set about constructing the largest stone Buddha ever. Since the cliffs were some 80 metres high at the site, it seemed appropriate to fill them to their full elevation with a sculpture of the Enlightened One.

Not only would the resulting seated figure be complete in all details, but it had to appear perfectly proportioned when viewed from the water. Haitong had craftsmen make a model that he used to determine the best placement of the main event. When the sheer sandstone cliff was chosen it was quickly apparent that construction was going to require considerable manpower and vast material resources.

However, the Tang Dynasty ruler at the time must have considered it worthwhile as resources were soon provided. Thousands of workers were marshalled to begin rough-shaping the site. Construction ran for several years and, inevitably, costs mounted.

When court auditors moved in, it seemed unlikely that funding for the project would continue. In protest, Haitong is alleged to have gouged out his eyes. Following his death, construction ceased.

Seventy years down the track the local military governor decided to restart the venture, agreeing to provide the necessary sponsorship. Construction was recommenced and finally completed in 803 AD.

The results speak for themselves. Buddha is 71 metres high, and his body engineered to fully drain water after rain. His head is 10 metres across, with a nose 5.6 metres long and eyes 3.3 metres wide. Those exquisitely detailed ears are created in wood.

His shoulder width is 28 metres, fingers average 8.3 metres, and each foot is 8.5 metres long and complete with toenails. His hair consists of 1021 individual strands that appear as curly bumps on his head.

The massive construction saw most of the excavated stone dumped in the river. The volume involved was such that it substantially altered the flow pattern of the rivers, making them safe for shipping. Make of that what you will.

Today it is a UNESCO World Heritage Site.