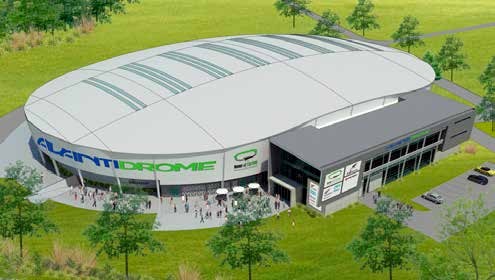 Sometimes even a worthy project needs a champion to carry it forward and rally support. In 2010, a regional bid team in the Waikato dreamed of establishing a national velodrome with an indoor track that would comply with Union Cycliste Internationale (UCI) standards. The trouble was the team didn’t have the resources to get the wheels turning.

That didn’t deter Livingstone Building NZ Ltd, whose managing director Mike Livingstone said yes when asked to support the Waikato Bid Team with a design and build offer. “Our concept and costs came to $28.5 million, and in February 2011 the bid was successful. The challenge then was to put together the design team that would deliver on our promise,” Mr Livingstone says, “and still satisfy more than half a dozen distinct user-groups.”

The project moved up a gear with the formation of the Home of Cycling Charitable Trust, set up to promote health, fitness and physical well-being through the development of cycling and related facilities for public recreation. Chief executive Geoff Balme says the trust is developing infrastructure, including the indoor velodrome (to be known as the Avantidrome), and space for related cycling support services that will quickly become nationally significant.

“Our mission is to operate world-class cycling facilities from which world-class cycling programmes are delivered,” he says. On land adjacent to St Peter’s School in Cambridge, the site has easy public access — it’s close to the National MTB centre of excellence in Rotorua, it’s near the Cambridge BMX track (one of New Zealand’s best), and it’s not too far from the Rowing Centre of Excellence at Karapiro.

But it’s sandwiched between State Highway 1 and a steep gully. CBM Team Architects principal Dominic Buckell talks about the positioning of the building. “The original concept was for a track with seating around it for 1500 spectators and an integrated two-storey amenities block. But at 10,000 sq m, the arena would fit in only one orientation,” Mr Buckell says.

“Quite early on, the decision was taken to separate the amenities and administration block from the arena rather than keep them under the same roof. The envelope was designed to enclose the concourse and spectator seating, retaining within these the indoor track with its curved ends and banked surfaces.” The concept geometry for the Avantidrome was defined by LHT Design. The company’s design engineer at the time was Toby Mason, now a director of CREATE Specialist Consultant Engineers.

“We envisaged the initial 3D form as generated by using a torus (doughnut) for the roof plane,” Mr Mason says. “This provided a rational geometry that would be easier to clad, without wrapping, and achieved the clearance height required over the track, while reducing the cladding height around the perimeter eaves.

“Differences in scale and stiffness between the arena and the amenities/admin block meant it would be best if the two elements could move independently,” he says. “For the arena we settled on a tri-chord truss with two upper chords and one lower. The main trusses span the shortest distance across the arena. In the longitudinal direction, each truss is arrayed in elevation to allow the same truss to be used in multiple locations.

“The trusses are vertically supported around the perimeter on a series of columns. In order to increase the spanning ability of the trusses and provide lateral sway stability for the roof plate, we portalised the eaves connection between the roof trusses and the columns. Then, to give the building a more dynamic form, we inclined the columns outwards by 10 degrees. “With the primary roof curvatures defined, we designed the double curved roof surface, incorporating the plan outline of the track, the perimeter seating and an allowance for the inclined facade.

“In effect, we developed a ‘cookie cutter’ outline and used this to cut into the toroid roof form. Thus the roof surface was defined on plan by the arena footprint and an eaves level that undulated in response to the cut form. The result was a rational, double-curved roof surface, optimised to the requirements of the space below, i.e., high over the main track and infield and a reduced height around the curved ends.”

The brief required the design to be capable of increasing the seating capacity to 4000 when hosting a world event. The decision was taken to future-proof this by allowing the facades to be removed so that temporary seating could be added.

This drove the need to minimise lateral bracing in the wall plane by establishing fixity at the base and head of all the perimeter columns. The central roof bracing ensures that the necessary diaphragm action is available. Meanwhile, movement joints were introduced between the main arena and the adjacent amenities block, as well as locally between the arena steelwork and the ground supported concrete concourse.

The scale of the building (115m long by 76m wide and a maximum height of 19.8m), meant that wind loads would ultimately drive the design of the steelwork. Windtech, of Melbourne, Australia, was commissioned to conduct the wind tunnel testing, as the company has considerable experience of the wind assessment and modelling in such buildings. Through the design development process, the arena footprint evolved and the adjacent administration block changed to a three-storey facility. The arena form was adapted to respond to these changes.

Ultimately, then, the 3D model provided by LHT Design became the base for the architect and the steel fabricators to use. Jensen Steel Fabricators of Tauranga won the contract for the detailing, fabrication, painting and erection of the main arena steelwork, subcontracting five of the nine roof trusses to Grayson Engineering of Auckland, together with the rolling of the truss chords and the specialised profiling of the ends of the CHS members. Jensen contracts manager Bill Muirson has some telling statistics.

“Some 540 tonnes of hot-rolled steel Circular Hollow Sections (CHSs) went into the arena, plus 103 tonnes of cold-rolled purlins. The nine tri-chord curved trusses are supported on a ring of 30 CHS columns (508mm diameter with a 26mm wall thickness x 12m tall). On average, the trusses were 76m in total length and 6m wide at the centre,” Mr Muirson says. “They were fabricated in three pieces with a 36m centre section and two 20m ends. Four end trusses (two per arena end) were made by Jensen Steel Fabricators and had slightly shorter ends to support the toroid roof form.

“Grayson Engineering fabricated the five central trusses and used their specialised plant technology for the profiling of the ends of all the truss CHS members. This technology enabled precise cuts to be made in a single operation with bevels for positional weld preparations. “Transport of all the centre and end sections of the trusses was carried out at night, escorted by pilot vehicles, all wending their way from Auckland and Tauranga (over the Kaimai Ranges) to Cambridge.”

Mr Muirson recalls the tricky sequencing that had to be followed for the erection. “The overnight and early morning deliveries of the truss centre and end assemblies were co-ordinated through one narrow arena entrance way. The components had to be positioned with the three cranes that would be involved in unloading and lifting. The centre truss assembly was, in fact, lifted directly from the truck into position. All of this took part within the dimensions of the arena, which diminished as we worked towards the last end and the entrance way.“

Each truss (76m long at arena centre), had to be erected in three sections (middle and two ends), separately but concurrently, to take into account the outwardly leaning columns and minimal fixing tolerances and self-load deflections.

“First, the truss ends were hoisted, fixed to the columns and then, while the two ends were being held up just enough to accommodate the truss centre section, this was hoisted and lowered into position between the ends, so that the three chord splices at each joint could be bolted,” Mr Muirson says.

“As the weight was taken up, this pushed the columns slightly outwards. The now complete truss settled in a predetermined deflection under its total self-weight. From the centre of the roof, each subsequent truss leaned over by three degrees to form the longitudinal roof curve over the arena. This was achieved by holding each erected truss at its correct tilt whilst all the struts were installed.”

The amenities/admin block is a three-storey structure in which Jensen Steel Fabricators also installed 180 tonnes of hot-rolled steel section and eight tonnes of cold-rolled purlins. Mike Livingstone adds the main contractor’s perspective. “Certain stages just had to go right, and when it came to the main arena steelwork, Jensens stepped on board early. “Our programme demanded one truss per week, and they delivered on time, with everything fitting perfectly. The steel structure of the arena had to be kept as light and efficient as possible. It moves more than the concrete concourse and the office block.

“All three elements had to be seismically separated, which resulted in joint detailing challenges for Jensen Steel Fabricators. Their accuracy was consistent and helped keep us on programme. The other subcontractors, likewise, helped us meet the challenge of doing things better and faster, so that at the end of the day, we kept the project within our $28.5 million target.”

Because the design and installation of an indoor track is highly specialised, the contract was awarded to the world leader in velodrome installation, the German company of Schuermann. The actual track surface is made from Siberian spruce 40mm square and cut in lengths of up to five metres. The bottom row is fixed first all the way around the track, then the next row and so on all the way up to seven metres, using a nailing technique that is a well-kept Schuermann secret.

The track lengths are pulled together by hand and nailed by hand — no clamps are used and no nail guns. The result is that the track retains enough flexibility to be considered as “floating”. Over its life, the track will expand and contract, with this flexible construction allowing that to take place.