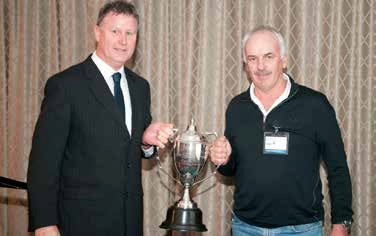 The Construction Cup has been won by the Taranaki branch of the Registered Master Builders Association.

The cup is awarded to the branch that has the highest percentage membership increase over a 12-month period.

Taranaki Life Member Gary Lord says as a branch, Taranaki is very aware of the need for younger members and the need for them to be nursed into the membership.

“We have a dedicated executive member, Jon Lines, who vets all new applications and then organises a coffee meet with the new member and normally two of us old boys so we can get a face-to-face feel for the new member that you cannot get from a piece of paper,” Mr Lord says.

“And the prospective member can put a face to the name and ask us any questions they may have too.

“We step them through a questionnaire we have devised to make sure we understand their strengths and weaknesses, and where we can help when they become members. We explain to them the importance of the membership, and the code of ethics we adhere to in Taranaki.”

Mr Lord says the Taranaki branch is looking to again run a meeting that shows new members the basics of the construction business, whether it be how to build up a correct charge out rate or to understand the importance of back costing jobs.

As for the future, he says Taranaki is similar to most of rural New Zealand, and is emerging from the past few slow years.

“We anticipate a continued growth for the next 12 months, but with an eye on the dairy pay out that could stifle growth. But we are lucky to have a strong Taranaki economy that allows us to keep our existing staff currently employed,” he says.

So how did Taranaki beat construction hotspots such as Auckland and Canterbury to the much sought-after annual award?

“When you have the best climate in New Zealand, the prettiest girls, the highest capita per population and you work as hard as Jon in obtaining members, it is a given,” Mr Lord explains.