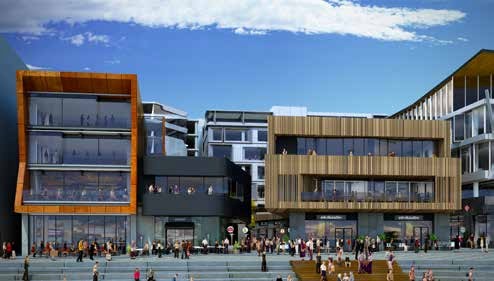 At times, especially those following major earthquakes and the losses they cause, it takes a brave heart to declare his intention to rebuild.

Developer Antony Gough of Hereford Holdings Ltd has the courage and the vision to be one of the first to say it should be done in Christchurch’s CBD, but he’s not just rebuilding — he’s building anew.

The Terrace Precinct is bounded by Cashel Mall, Oxford Terrace and Hereford Street.

“We are building hospitality, retail and office buildings that will incorporate avant-garde engineering,” Mr Gough says.

“The people who use these buildings can be confident they have been designed specifically to give enhanced seismic performance while minimising the risk of structural damage that major earthquakes can inflict. It’s my belief that Christchurch is now ready for this to be done in our CBD.

Arrow International was appointed as the main contractor, subcontracting Aurecon as the structural engineers. Tessa Beetham of Aurecon explains how they responded to the architects’ interpretation of Mr Gough’s brief.

“The brief to Jasmax was for full-height clear glazing on all four sides of the buildings to allow for retail and hospitality frontages to the streets, laneways and the piazza.

“For Aurecon, this eliminated the possibility of braced bays or shear walls within the structural system,” Ms Beetham says.

“In addition, the developer had stipulated that a low damage structural system was required. After considering many designs that met these criteria, we decided on a two-way structural steel moment frame as the best structural option. This low-damage solution incorporates asymmetric friction connections at the beam/column joints — i.e., in two directions, and friction connections at the column bases to prevent hinging in the beams and columns, which would have increased the risk of structural damage.

“The two-way moment frame spreads the seismic loads at ground level and allows the use of a shallow, reinforced concrete raft foundation.”

The two-way moment frame is a progression from the “Sliding Hinge Joint” first developed by Dr Charles Clifton at the University of Auckland. It was used by Aurecon in two Wellington projects — the Bellagio Apartments and the Te Puni Village at the University of Victoria.

However, the connection has only ever been used before in a one-way structural system. It allows for the structure to dissipate energy during a seismic event through sliding that takes place between the bottom beam flange and the bottom plate of the connection.

Holes in the bottom flange plate and the web plate are slotted to allow for the beam to rotate without causing damage to the structure. Following a large seismic event, the extent of structural repair will be limited to the replacement or re-tightening of the bolts in the connections.

“The unique aspect of the two-way sliding hinge joint is its use in a bi-directional system,” Ms Beetham says.

“This allowed Aurecon to use a grade of steel for the 600mm columns that had a lower ductility capacity than would be employed in a conventional seismic design.

The seismic resilience designed by Aurecon was overlaid into the architectural and operational brief, and the two-way sliding hinge joint moment frame as shown in what was dubbed Building B at the time of writing has provided a low damage resilient structure of which Antony Gough can be justifiably proud.

Challenge in the drawings detail

“The main challenge was in the detailing of the drawings, putting the emphasis on the correct sequencing,” John Jones Steel general manager Dave Anderson says.

“After that, the quality of the welding was maintained by following high-level quality assurance procedures. The plate weight was another factor. Because this was the first time in the world that the two-way sliding hinge plate had been used, the engineers had taken a conservative approach, which was then peer-reviewed and approved by the University of Canterbury.

“Once the square hollow columns were installed on site, they were concrete-filled to provide stiffness and a bi-axial bending capacity under two-way seismic loading. The required column fire rating was achieved by applying intumescent paint, rather than reinforcing each column with steel inside the concrete.

“Beam penetrations done in the workshop make services installation easy, and ensure the follow on to the installation of the Comflor 80 steel flooring system is unimpeded.”

“Even though practically all of the seismic stress would go through the square columns, which made for heavy loading to take the shear, the erection work was straightforward and fast.

We also avoided the heavy cost of deep concrete foundations by being able to use a shallow, reinforced concrete raft foundation.”

At ground level the floor to floor height is five metres, and four metres for the levels above. There will be access to dedicated terraces, or to open space in the courtyard and laneways.
Level one has terraces designed and orientated to receive sunlight and benefit from the views around. It will also have hospitality tenancies and house a cafe/bar. Level two contains a boutique office space.

This kind of development in the Christchurch CBD will draw people together in a true mixed use environment. As Mr Gough says, offices, hotels and retail outlets are prime movers, but at the top of his list he puts hospitality.

“I don’t see myself merely as a developer, but as an investor/developer,” he says. “My tenants are my customers and, therefore, I listen to them to understand the important details and sizes of what they really want!

“All my new buildings have windows on all four sides, and they are all bespoke! Rather than think first and only about the cost, with every one of my projects I get involved early with the people who design and build them. We are investing in a new CBD for Christchurch, one that will safely reflect and be enjoyed by the people who will use it.”