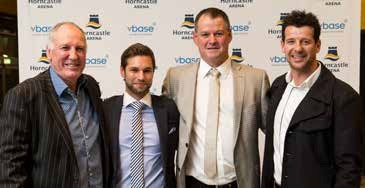 The Horncastle logo was revealed atop the arena as CBS relinquished its naming rights sponsorship following a merger with Heartland Bank.

Managing director Bill Horncastle says the Horncastle Arena sponsorship is a long-term commitment to the people of Canterbury.

He describes the arena as a stunning building and good all-round facility that has been enjoyed by the wider community, including Horncastle’s clients and staff.

“I’ve seen Rod Stewart and Neil Diamond at the arena, I’ve been to sporting events, home shows and school events, so this investment was very much about building a positive future for the city,” Mr Horncastle says.

“Our sponsorship sends the message that Horncastle Homes is here for the long haul. We’ve been operating in Canterbury for more than 20 years, and want our customers to have confidence that we will be here in another 20 years’ time.”

Mr Horncastle says many building companies were quick to try and catch a ride on the rebuild wave, and notes smaller operators are already starting to fall by the wayside. He believes that some of the mid-to-large sized operators don’t have staff with the right skills and experience — an issue he predicts will cause problems with the huge residential rebuild.

“We’ve taken a slightly different approach because we want to be sure Horncastle is in a position to honour our building guarantees.”

Originally from Westport, Mr Horncastle has worked as a builder since he was 16 years old and landed his first commercial project aged 20 — a major extension of Karamea Area School.

The family-owned Horncastle group has operated in Canterbury since the 1990s, and employs a large staff of experienced professionals in a wide range of disciplines. Horncastle ranks among the region’s top five home building companies.

Unlike many other group home builders, Horncastle Homes doesn’t offer standard plans, which means all homes are designed according to their customer’s requirements, property location and relationship with adjoining properties.

The business is led by an experienced board of directors and a general manager who work alongside Mr Horncastle and his wife Mrrietta. Their two eldest sons are the next generation to join the Horncastle brand.

Mrrietta, a born and raised Canterbury local, says Horncastle’s motto of “We call Canterbury home” is a true reflection of their ongoing commitment to Christchurch.

“There was no way we were ever going to leave Christchurch after the earthquakes. We have five children and a business with many employees. This is our life, Canterbury is our life.”

Many Christchurch residents looked to Horncastle Homes to help relocate their families following the February 2011 earthquake, and have again sought Horncastle’s services as an approved rebuilder for all major insurance companies.

Horncastle will be working in partnership with venue management company Vbase to promote the Horncastle Arena.