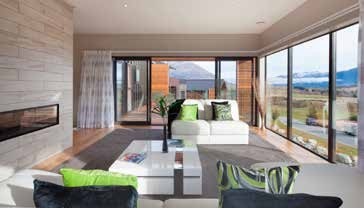 Nestled at the foot of the Remarkables mountain range, and with views of the surrounding mountains including Coronet Peak, the home showcases many of the features available in an evolution series home.

Trained consultants will be on site five days a week to show people around the home and answer questions on building energy-efficient homes.

Rilean’s evolution series homes launched in December 2010 and since then almost 20 contracts have been completed or are presently underway.

Rilean Construction’s Mick Moffatt says the new show home enabled the company to “truly showcase what an energy-efficient home could look and feel like”.

“We got some great numbers through that property, and it was only open for a couple of times during the month. People like the fact they can easily come to a show home and ask questions they have around energy-efficient home building.

“Overwhelmingly, one of the first things people say when they walk into an evolution home is how warm it feels. It passively creates and retains warmth, therefore reducing the need for other forms of heating.

“People have become a lot more interested in building high performance homes not only for environmental reasons but also financial reasons. An evolution series home not only looks great but it can save people money in the long run, be healthier and protect the environment for future generations,” Mr Moffatt says.

Carefully thought out and well designed, the show home has many features and shows people that their future evolution home can be tailored to an individual’s unique tastes.

“Everyone has different budgets and priorities when building a home, so we can now easily show people the various options in place at a home and they can decide for themselves what they’d like.

A spacious garage and office complete the show home, which cost around $550,000 to build, including design, GST and consent for the home only.

The Rilean team monitors all evolution homes for energy efficiency post-construction, and all of those built so far are performing “even better than we thought at design and modelling stage”.

“One home in particular is using approximately $1200 per year for electricity, including heating and hot water use — which is incredibly good,” Mr Moffat says.

“We’ll be closely looking at the energy efficiency of this home so we can give people the hard facts on how they will save money and live healthier lives in an evolution home.”

The Jack’s Point home will be Homestar-rated over the next few months, adding to its already strong appeal in terms of energy efficiency.