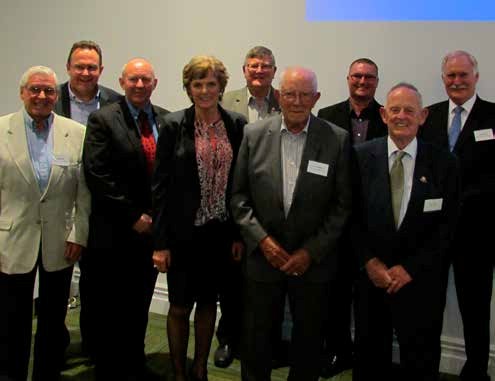 The RMBA’s Auckland branch honoured its past presents and its oldest company memberships, including one — N Cole Ltd — which has been a continuous member since at least 1928.

The Auckland Registered Master Builders was formed in 1898, and has a proud membership heritage including some of New Zealand’s finest builders.

N Cole Ltd’s membership is simply so old that an exact starting date cannot be found. The earliest clue is the Association Presidency board, which states that the company’s original owner, Noel Cole, was president in 1928 and 1929.

To have been president then, the rules state that he must have been a member in prior years. However, with no other proof, 86 years of continuous membership is still quite some feat.

N Cole Ltd was first registered in 1932, but Mr Cole’s building company was running long before then. Searches through national archives have discovered articles crediting the company with the construction of the Shortland Flats on Shortland Street in 1923, the outward goods shed at the Auckland Railway Station in 1926, and the Waitomo Hotel in 1928.

The company was also given the contract by Amalgamated Theatres to build and renovate many of its theatres throughout New Zealand. Even the iconic Mission Bay water fountain was built by N Cole Ltd in the 1950s.

More recent works were the upgrade of the Auckland Museum, Rydges Hotel, and the Lion and DB Breweries plants.

In the early 1930s, Mr Cole took on an apprentice by the name of Keith Coyte. Mr Coyte later became the company’s quantity surveyor, and in the 1970s he bought a half share of the company.

Also in the 1970s, Mr Coyte’s son David started his apprenticeship with the company. Fast forward to today and David now owns N Cole Ltd outright, carrying on its legacy.

The company has a rich heritage of always delivering unique and complex projects. It has a strong heritage which is developed around a commitment to building relationships and delivering high quality services to its clients.

Another member that has clocked up a staggering 64 years of membership is Lawton Building Ltd.

The family-owned company was run by George Lawton in 1950. He passed the reins to his son Ron who became very well known within the Association as a member and president of the Auckland Registered Master Builders Board.

Since retiring, Ron has passed the business on to his son John who has successfully managed the company for the past 20 years.

Longevity and success have been achieved through the promotion and implementation of the company’s long standing philosophies of fairness, accountability, honesty, efficiency, attention to detail and building long-standing relationships with its clients.

Other long-standing memberships who were recognised were:

The Association is planning a similar long service function in 10 years’ time.