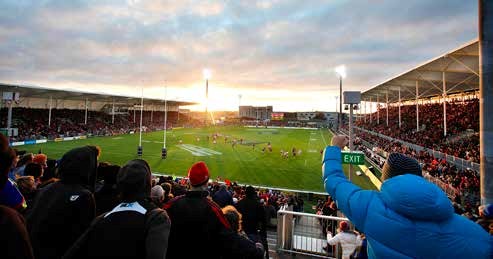 The deadline of a Crusaders home game looming over them post the Christchurch earthquakes saw Hawkins Construction take on the task of building an 18,000 seat temporary stadium in just 98 days.

With a team of more than 400 workers on site and more than 180,000 man-hours, Hawkin’s efforts were recognised as they took out the Industrial Category and won Gold in the 2014 New Zealand Commercial Project Awards.

Hawkins Construction South Island Ltd, along with project managers RCP, architects Populous and engineers CPG and Beca, worked together to ensure all work was carried out efficiently, effectively and safely.

“The key thing is we had no time — so we had to be really careful with time management. But knowing that was a key risk, we mitigated it by close attention to programming and making sure everything was sequenced,” Mr Holmes says.

“We also had to have robust daily contingency plans ready as well, just in case. The co-operative spirit between all partners pulled this project together. There was a great degree of trust at all levels which helped get us across the line.”

The extensive planning involved a detailed day and night roster, critical in ensuring all necessary work was completed in the time allowed. These tasks included the construction of the structural steel framework, electrical work and concrete pours.

The concrete platform under the north and south stands was one of the largest single concrete pours ever in Christchurch, with 230 delivery trucks coming and going overnight.

Getting all the materials quickly was also a vital component in this timely project, requiring some innovative recycling and a “can-do” attitude from the team.

The lighting towers used were from Carisbrook Stadium in Dunedin, a number of components such as food and beverage portacoms and seating were shipped from Auckland’s Eden Park, and turf from the former AMI Stadium was reused.

“There were a number of components coming in from different places, so we adopted a recycling mentality which allowed us to morph them into something new which was pretty exciting,” Mr Holmes says.

To all those involved, this project meant more than just a delivery of a building, but a testimony to the strength and resilience of Christchurch. Mr Holmes hopes the new AMI Stadium stands as a token of their pride.

“We managed to deliver it as a team because it was critical to meet the needs and aspirations of Christchurch. It was, for many people, the first bit of good news they’d had in a while.

“Project-wise, we achieved all our targets in terms of budget, time, quality and safety, and the people of Christchurch were grateful for it.”