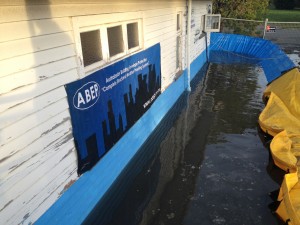 Four hundred houses in Christchurch — under threat of flooding as the Avon river, swollen by liquefaction after the earthquakes, pushes up the water table — have been “saved” by a new liquid membrane which insulates the ground floors, turning an $80 million job into a manageable $6 million one.

Wellington-based Seamless Coatings specialises in high-technology coatings for difficult applications, and was one of three companies applying BEP Blue Barrier on a sample house in the Flockton Basin in Christchurch — the worst affected area — in mid-July.

Christchurch-based Aecon Consultants offered it as a solution to Christchurch City Council for their 400 threatened Christchurch houses, and contacted importer ABEP whose Tim Gregory-Hunt recommended Blue Barrier, and nominated the companies qualified to apply it.

Christchurch City Council workers created a moat around one of the worst affected houses after the material was applied, and flooded it to test the product’s waterproofing qualities.

It was demonstrated as able to “save” a significant number of houses whose foundations and floors would otherwise have had to be virtually rebuilt to raise the floors to safe levels.

Seamless Coatings’ Terry Archer says he’s already using the product on stucco-type walls on houses all over Wellington, and will be completely covering a Monolithic-clad high-rise in Auckland.

But, ironically, while it’s great for coating large areas, as in Auckland and the Christchurch projects — and with a specific Elastomeric coating in any colour and any surface finish — its designed use is as a rigid moisture and air barrier for the pre-lining of new builds or re-cladding.

“We also use it as a gap filler caulking around window surrounds, joint seams and problematic areas of all kinds,” Mr Archer says.

“It’s magic stuff — you can trowel it on, roll it on, and even apply it under water. By using it first you won’t get expensive rebuilding or refurbishment to do.”

Mr Archer makes the point that the product’s many applications make it suitable to sort out the leaks in many of the afflicted Auckland structures.

Blue Barrier got its New Zealand Code Mark accreditation a few months ago, but has been well proven in the US on many applications over a number of years.

BT’s Back in Time