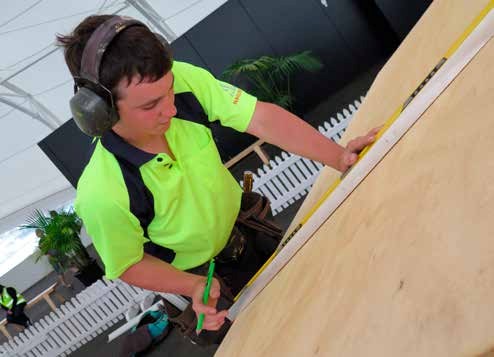 It was a massive shock to Palmerston North apprentice Ryan Smith-Pilling, employed by Nailing It, when his name was read out as the third place winner at the Registered Master Builders Carters 2014 Apprentice of the Year.

He says while building has always been in his blood, he didn’t expect to make it to the national final.

“From a really young age I enjoyed making things and using my hands. My granddad was a builder and my dad owns a power tool centre, so that was a big push. I got my first tool box for Christmas when I was five or six,” he says.

“I didn’t expect to be placed at all. I’m lucky to have been taught by the best — who you learn from is a big factor in how well you do at the competition. I put a lot of credit to my boss for getting me to the national finals.

“I worked alongside my boss for two years — he really pushed me and he made me push myself which, ultimately, is what you need when you’re competing in a competition like this one.”

The judges were impressed with Ryan, saying he presented well in his interview and came across as very sincere, and has a promising career ahead of him.

“Ryan is a mature apprentice who is focused on his career and keen to put the hard yards in now to set himself up for the future,” they said.

“He stood out as having an exceptionally well written project submission, and his confidence and ability to let nothing faze him during the practical challenge was commendable.”

Ryan says when it comes to the practical, you just have to put your head down and do the best you can.

“The practical challenge was all stuff I had done before, but I found having a massive audience watching my every move quite challenging. It was quite an unreal feeling — something I had never experienced before.

“I’ve had clients and my bosses come on site and see what I was doing, but that’s different to having over 100 people watching you. The charity that I was building for came down, and all these little kids were chanting my name and cheering me on — it was a lot of pressure.”

Ryan has grand plans for the future, including a dream of working for himself one day.

“I’m qualified now so I’m hoping to open up my own business if the time is right. I’d like to move into a project management role with a bigger company first and then probably go out on my own.

“Separate to my prizes from Apprentice of the Year, I also won a scholarship for $3000 to further my studies from the BCITO. I’m using the grant to do a BCITO supervisor course — so that’s my first step!”

Apprentices, employers and young people aspiring to be a part of the construction industry are encouraged to join the Facebook page at www.facebook.com/apprenticeoftheyear or follow us on
Twitter: @AOY_NZ. For more information, visit www.apprenticeoftheyear.co.nz.

Owned by the Registered Master Builders Association, the Apprentice of the Year competition is made possible thanks to principal sponsor Carters, the Building and Construction Industry Training Organisation (BCITO), and supporting sponsor the Ministry of Business, Innovation and Employment (MBIE).