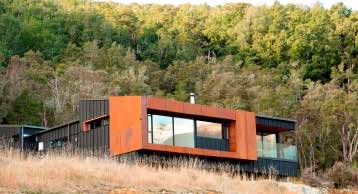 John Harris from Harris Builders was “stoked” when he heard his name read out as the winner of the James Hardie New Homes award in the $450,000 – $600,000 category for Registered Master Builders 2014 House of the Year.

Mr Harris says they won the same award a couple of years ago, but weren’t expecting this one, so it was a great feeling.

“There are aspects both inside and outside the home that I think made it stand out in the competition,” he says.

“I think the timber ceilings in the lounge and living area really make it stand out. They’re quite complex with all sorts of different angles which make it special. On the exterior I would say the Core 10 steel gives it a real different look.”

The main challenge for Harris Builders during this project was the location. It was situated approximately 90km from Nelson, on the edge of a national park and elevated a couple of hundred metres.

“We could only just get up there with a four-wheel drive, but as far as any of the materials went we could only crane them so far up the bank,” he says.

“We would have to walk materials the rest of the way which was about 40 metres!”

Despite the many challenges they faced, they also had a little bit of luck on their side on the weather front, Mr Harris explains.

“We were very lucky with the weather. We could have had snow or anything up there, so we had a really good run.”

Mr Harris believes that winning the award really helps to promote their name, both to the public and within the building industry.

“It helps to maintain our standards really. We’ve won a couple of other awards in the past so it helps us stay consistent,” he says.

“Having gone through the entry process before was an advantage, and also having an idea of what the judges were looking for.

“When I’m doing a house like that one, I’m thinking about how I would like to present it if I enter the competition. It helps knowing the standards the judges expect.”

The contemporary design calls for a high degree of craftsmanship, and the judges believed that Harris Builders “met this challenge superbly”.

“This family home is situated on a sloping site overlooking Lake Rotoiti, and exterior detailing with a major feature of Core 10 steel helps the home to merge seamlessly into the hill landscape,” they said.

“The C-shaped construction forms a sheltered courtyard, enabling the house to step up the hillside.

“The rear wing forms the children’s division, while the front wing of the house, with featured cedar ceilings, includes the master bedroom and ensuite, powder room, a large laundry for drying skiing gear and an adjacent sauna.”

Mr Harris joined Registered Master Builders back in 1999, when he felt he needed to be aligned to an association.

“I think the Master Build Guarantee system gives my clients peace of mind. Plus it helps when some of the architects I work with need to give their clients a guarantee,” he says.

The House of the Year competition works as inspiration for Harris Builders. Mr Harris believes it gives him a chance to see how their standards compare to other builders within the industry.

“It always blows you away when you come to the event in Auckland,” he says.

Mr Harris is taking a year off from the competition this year, as he is busy working on two big projects which will be potential entries for the Registered Master Builders 2016 House of the Year.