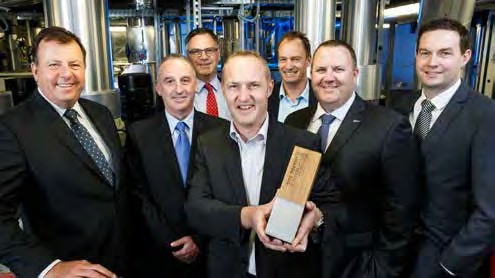 Designed and implemented by engineering consultants Beca as part of the airport’s $237 million integrated terminal project, the innovation has been labelled a game-changer for the industry.

Beca technical director and Christchurch Building Services manager Justin Hill was in London to accept the award, and says Beca was proud to be involved in the project.

“It was an honour to accept the award on behalf of everyone involved. This project epitomises excellent engineering in almost every aspect of the design and construction,” he says.

Beca business director Keith Paterson says the model is already being applied in other large-scale commercial buildings throughout New Zealand, and he expects other countries will soon follow suit.

“It has changed the market. People worldwide are recognising this is the most energy-efficient system, and they are following our lead,” Mr Paterson says.

“There are great benefits in terms of reducing pressure on recurrent costs, and moving forward I think it will be the system of choice for all temperate climate countries. If artesian water is not available, then sea, lake or canal water could be an alternative.”

Originally installed in the airport’s new domestic terminal, Beca has now also been commissioned to replicate the system in the international terminal. Design is currently underway, and the team hopes to have it retrofitted by the end of the year.

The system uses artesian water that flows beneath Christchurch and the Canterbury plains. Easily accessible through wells, artesian water provides the system with a cost-effective, long-term heating and cooling solution and a sustainable energy source.

The benefits are vast. LPG, diesel and cooling tower requirements are eliminated, maintenance costs and structural loadings decrease, and the same energy is used for both cooling and heating, to make it around five times more efficient than standard systems.

For every kilowatt that is put in, on average around five, and as much as 12kW, of thermal energy can be provided to the building.

The end result is a revolutionary system which enables energy from artesian water to both heat and cool the building at any one time.

It also has the ability to recover and redistribute heat energy.

Various challenges had to be overcome before the project received the green light.

“We had to prove that the water was available and able to be used in this way before we could even gain resource consent,” Mr Paterson says.

“Artesian water is also quite harsh on some materials. To avoid failures we used plastic pipes which had started to become more affordable.

“We were also developing a completely new system which is the first of its kind to feature this type of configuration. Therefore, the airport had to put a lot of trust in us but they were courageous enough to give the go ahead.”