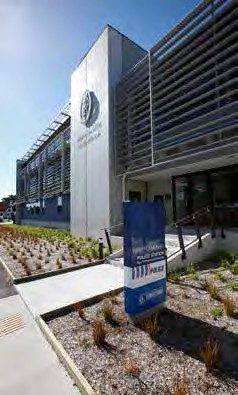 The three-storey, eco-friendly building, located across the road from the New Plymouth courthouse, was originally meant to accommodate police on two floors, with extra space for future-proofing.

But when designs were being finalised, news came out that New Plymouth Prison, built in the 1870s, was expected to close.

The Joining Forces Programme, established in November 2011, was seeking ways that Police, Corrections and the Ministry of Justice (Courts) could work together more efficiently — and the new police station seemed like the perfect place to start.

The $17 million project, built by Clelands Construction and designed by AECOM NZ Ltd, includes a two-level wing which accommodates Police’s 12 single-bed cells, dog handling and search and rescue on the ground floor, with Corrections’ 12 double-bunk bed remand centre on the next level above. Both services share a processing area.

Initial designs were revised to add an extra storey, and boost floor area to around 3000sq m — making room for Corrections’ extra needs.

Clelands Construction project manager Bruce Earby says continuing with the build of the police station while waiting for the new designs and pricing to be approved for the remand centre was difficult.

“Ensuring precast panels, in particular, could be erected safely within the constraints of a tight building site proved quite challenging,” Mr Earby says.

“Given that access for all the heavy steel secure joinery could only be provided by craning it in through an opening in the second level, we had to ensure all dimensions of the fully precast internal wall layout were within 2-5mm tolerances so these items could be installed as the build progressed.”

The 21-month project was completed on time, while ensuring uninterrupted police services in the region. Prior to the demolition of the old police station, Clelands fitted out temporary premises for the police to operate from.

The building — which won a Silver Award Commercial and Civic in last year’s New Zealand Commercial Project Awards — has been designed and built for durability.

The structure is reinforced with concrete columns and beams with precast reinforced ribbed floors. Structural steelwork supports the roofing system, which is a fire-rated polyurethane sandwich panel.

State-of-the-art security is built in, while sustainable features include solar hot water, a water system that captures and re-uses rainwater, sensor lighting and intelligent heating ventilation and air-conditioning.

All windows are double-glazed, and the northern face, which is subject to solar gain, is shielded by an external louvre system.

“I think the way that the Clelands build team, architect, engineer and client gelled from the start meant that, even though there were challenges, we all had the confidence in each other to deliver great results,” Mr Earby says.

“Feedback from the community and police staff has been very positive, and we enjoyed a fantastic project and build.”