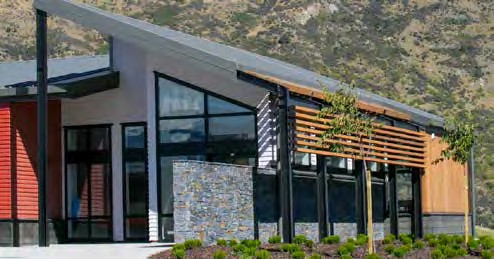 The company certainly wasn’t messing around at the back of the class, completing stage one of the project on January 30, 2015 — just 37 weeks after work started.

ABL quantity surveyor for the project Karsten Pedersen says the team was “hugely proud” to be part of such an important development for the local Shotover Country development and wider school community.

“Our involvement with our close-knit local community only added to the importance of delivering on time,” Mr Pedersen says.

“Many children of ABL staff or close family members and friends were planning to attend from day one so there was just a little bit of pressure there!”

Mr Pedersen says the school was an integral part of the new Shotover Country housing development, and provided a much-needed facility due to continued rapid population growth.

The ABL team and subcontractors had been working six days a week since June to ensure the school would open for the first day of term on February 9, 2015.

“Our team, including our subcontractors, have really put heart and soul into this project, and deserve special praise for their commitment and hard work,” Mr Pedersen says.

The school was built by ABL on behalf of the Ministry of Education. Its design acknowledges the natural surroundings, and features modern learning environments with a number of multi-purpose spaces to allow for individual and collaborative teaching and learning.

The completed first stage includes the first learning block, catering for up to 180 pupils, the administration building and the playing field.

A hard court area containing two playing courts was handed over to the school recently, also on schedule.

A second, larger learning block, for a further 280 pupils, is on track for completion in July.

Eighty-eight foundation pupils began their studies at Shotover Primary, most in years One and Two.

“It was truly heartwarming for us to see these excited kids, parents and teachers walking into the school on the first day of term,” Mr Pedersen says.

“Our team and the subcontractors all really pulled together to make sure stage one was completed on time for the kids. It was fantastic to see everyone working passionately together for a project with such importance to the community.”