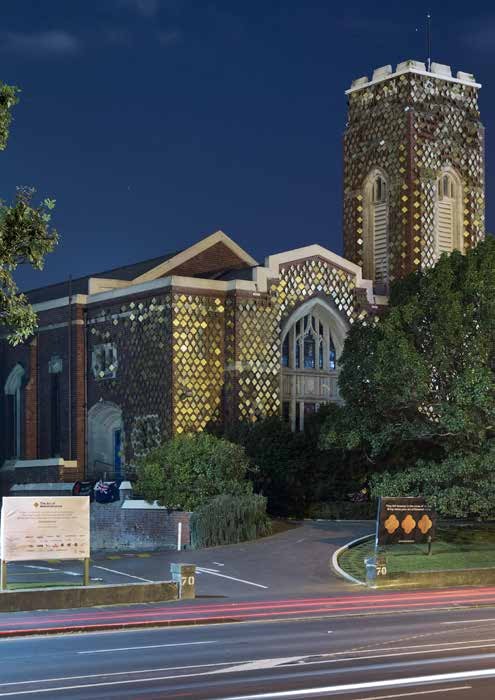 A spectacular memorial artwork to commemorate the 100,000 New Zealanders who fought in World War I was brought to life on Anzac Day thanks to the generous efforts of Kiwi companies such as Hirepool.

The company donated specialist equipment, allowing thousands of brass, poppy-shaped “quatrefoils” to be installed on the exterior of the historic St David’s Church on Khyber Pass Rd in Auckland.

They cascaded their way down the church’s imposing tower and onto the surrounding grass, in a manner similar to the acclaimed Tower of London art installation which featured more than 800,000 bright red ceramic poppies late last year.

New Zealand’s own artistic tribute was devised by celebrated painter Max Gimblett who grew up in Grafton and used to attend St David’s Church. He is now based in New York and his artworks hang in galleries all over the world.

Hirepool general manager of sales and marketing Gary Richardson says the idea was a moving way to commemorate Anzac Day and the centenary of the Gallipoli campaign.

Almost 7000 brass quatrefoils (which are also a symbol of peace and new life) will glow and shimmer in the light over the next three months, creating a magnificent display against the aged red brick and Oamaru stone of St David’s.

“It looks spectacular, and Hirepool is honoured to have been asked to help make this project possible,” Mr Richardson says.

“I wouldn’t be surprised if images of the display go viral around the world, just like the Tower of London’s poppies did. It looks beautiful, but is a sombre reminder of how many people gave their lives in World War I for our freedom.”

Hirepool donated one of its large self-propelled articulating booms which can reach a height of 25m. That allowed the delicate installation process to occur during the week before Anzac Day.

“Hirepool has been part of the New Zealand business community for nearly 60 years. We’re always keen to support good causes and show our national pride, and we couldn’t think of a better way to do that on Anzac Day than by helping bring this wonderful idea to life,” Mr Richardson says.

The memorial artwork was organised by the Friends of St David’s Trust, who raised money to restore the war memorial building. St David’s is also known as the “Soldier’s Memorial Church” — its foundation stone was laid on Anzac Day in 1927.

Each glimmering quatrefoil is the size of an outstretched human hand, and 100,000 of them have been made in total. The trust plans to sell them for $80 each, with discounts for RSA members and Gold Card holders.

It’s hoped the quatrefoils will end up in homes, art galleries and museums across New Zealand and overseas at the end of the installation period.

“Hirepool really hopes New Zealanders will get in and support this wonderful initiative,” Mr Richardson says. “Each quatrefoil commemorates, with gratitude, those who died for us on World War I battlefields. Together, we will remember them.”