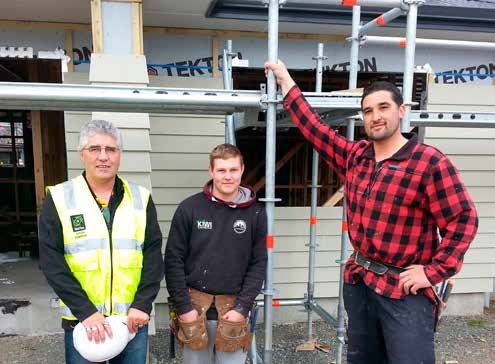 Young Hutt Valley builder Sean Ryan’s pathway through school and study has led him to a job he enjoys so much, he says it doesn’ t even feel like work. Sean, 20, works full-time for Kiwi Construction, and is completing his Level 4 National Cer tificate in Carpentr y at the Wellington Institute of Technology (WelTec).

The former Wainuiomata High School student’s love of building was first sparked by a family project. “I helped my granddad build a deck,” Sean says. “And in Year 12 when I started enjoying subjects like graphics and architecture I realised that building was what I wanted to do.”

From there on, Sean knew the direction he wanted his career to go, and took school subjects to support this. In Year 13, he was offered a place at the Wellington Trades Academy, which meant he could incorporate the practical component he loved most with his classroom learning by attending the site at the Wellington Regional School of Construction four days a week, with one day a week in class.

Learning in a Trades Academy gives students a chance to learn work skills while still at school. It also allows them to earn sector-related credits which can contribute to a Vocational Pathways Award which, in Sean’s case, is for Construction and Infrastructure.

Passion for his work

Sean’s passion for his work and commitment to achieving meant that, as well as reaching NCEA Level 3 in Year 13, he also received a Hutt City Council Centennial scholarship and a Wellington Trades Academy top student prize scholarship so he could study at WelTec full-time.

He completed his Cer tificate in Carpentry Level 3, and straight away got a job in commercial building. From there he joined Kiwi Construction, where he has been part of a team building houses. And now he is studying for his Level 4 National Certificate, which takes a lot of commitment outside work after a tough day on the job.

Sean’s WelTec carpentry tutor Tana Phillips is proud of what he is achieving. “Sean is one that really stood out — from seeing him as a young kid and while still enrolled at secondary school coming into a Level 2 cer tificate, and then progressing through and now doing Level 4 while working,  it is impressive.”

Sean’s advice to other young people keen to end up in the construction industry would be to follow a similar path to his. “Do a trades course through a Trades Academy if you can. It really helps get you started.” Sean’s boss at Kiwi Construction, Callan Brouwer, agrees.

He noticed a big difference having an employee who had had hands-on experience early on. “It’s more about their work ethic and attitude,” he says. “That’s what I look for when I’m hiring,” Mr Brouwer says. “If they’ve done the Trades Academy course it shows they must be keen, instead of wasting time with people who aren’t really interested in progressing in a construction career.”

Ministry of Education group manager for youth guarantee Arthur Graves says learning in a Trades Academy gives students real life skills and qualifications, and while using Vocational Pathways, young people can choose their study options and see how it relates to future job or career options.

“ Students can get relevant qualifications and a Vocational Pathway which will set them up for their next steps, whether it’s into tertiary study, industry training or employment,” Mr Graves says.