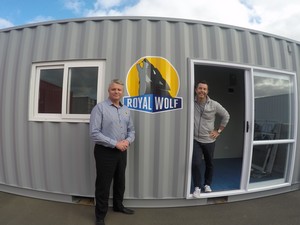 Royal Wolf has modified shipping containers into everything from temporary accommodation to a portable ice cream factory — and now it has created the Ultimate Man Cave.

The company has teamed up with sports broadcaster Tony Veitch (aka Veitchy) to turn a 20 foot container into the Ultimate Man Cave.

You can go in the draw to win the Man Cave container, which will be chock full of prizes including a Samsung TV, a spa pool, BBQ, a lawn mower, a voucher for a year’s supply of KFC, Heineken and much more, by going to newstalkzb.co.nz.

The Man Cave container will be located outside Degree Bar in the Auckland Viaduct during the Rugby World Cup. At the end of the competition Royal Wolf will arrange delivery of the container to the lucky winner, wherever they live in the country.

Of course, it’s not just a competition for the guys — the container can also double as a retreat for the ladies.

Royal Wolf executive general manager Paul Creighton says as well as being a heap of fun, the Man Cave is an example of how versatile a traditional shipping container can be for everyone.

“In terms of what Royal Wolf do, the Man Cave is a reasonably simple modification, yet it just shows what a big steel box can be transformed into with a good idea and some creativity.”
Mr Creighton says the Man Cave showcases Royal Wolf’s capacity to modify its existing range, offering bespoke container construction designs that cater to a customer’s unique requirements.

“We can modify containers to whatever the customer wants and needs to fit their unique circumstances — from portable kitchens and public walkways on construction sites to architecturally-designed houses.

“Veitchy’s Man Cave is just another example of what you can do in a Royal Wolf. And what better place is there than a container to lock up your favourite toys all safe and secure?”
Check out the Royal Wolf NZ Facebook page for regular updates about Veitchy’s Man Cave.