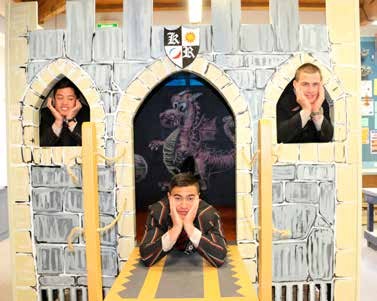 Rotorua Boys’ High School has been named the Supreme Winner of the Building and Construction Industry Training Organisation (BCITO) Build-Ability Challenge, winning all three of the national awards, including the People’s Choice award and the Best Video award.

Twenty-four schools went head-to-head in the nationwide competition. Teams had to not only design and build a playhouse to be gifted to a local community group, but also had to maintain a video diary and blog about their progress throughout the challenge at www.buildability.co.nz.

Rotorua Boys’ High School built an impressive castle-themed playhouse for Kidz Rock Early Learning Centre. The castle not only won over the judges, but was also a crowd favourite in the People’s Choice category.

The school embraced the technology aspect of the competition, successfully documenting their progress, and also took out the Best Video award.

The judges were extremely impressed with the quality of all of the projects this year, and particularly the winning entry.

“Rotorua Boys’ High School ticked all the boxes in the 2015 challenge. We were blown away by their project. Not only were research, design and build executed impeccably, but the story of their journey was clear for all to see on their blog,” the judges said.

“Their use of video and technology to present their story was very well done, and this was an important element of the challenge, given the high rate of technology adoption in the construction sector today.

“Although Build-Ability is a competition, the real purpose behind the challenge is to get young people working together, whilst generating interest in the construction industry.”

Rotorua Boys’ High School has been awarded a $1000 voucher for their Technology Department, a GoPro camera for the school and individual prize packs for each team member. They were also awarded a “team shout” to the value of $300.

Tamatea High School in Napier won the Best Decorated Playhouse Award, sponsored by Dulux, who have donated the school various paint products to the value of $1000.

BCITO chief executive Ruma Karaitiana says entries into the competition had more than tripled since last year, and was a real demonstration of secondary schools’ commitment to the construction industry.

“The industry is calling out for more apprentices and so it’s fantastic to see so many schools participate in this competition and giving students the opportunity to gain experience in building and construction,” he says.

Build-Ability is aimed to challenge students, and required teams to have solid teamwork, skills on the tools and good record keeping on blogs. With an emphasis on inquiry learning, the challenge provided students with an opportunity to take ownership of their project and their learning.

Each team was mentored by teachers and supported by BCITO Skills Brokers. BCITO will be running the Build-Ability Challenge again in 2016.