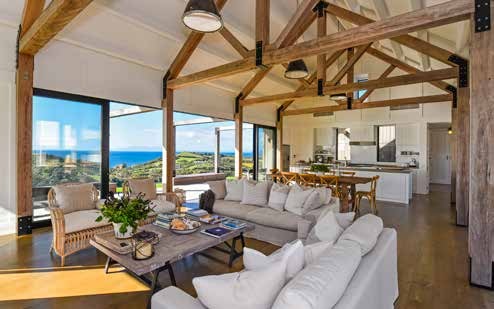 Kevin O’Grady of K2 Builders says he was stunned to hear his name read out as a winner not once but three times.

“I thought I might get a bronze for this home!” Kevin laughs. “And then when they read out that I won the Craftsmanship Award also, I was staggered. Then later when they read out the Supreme awards and said K2 Builders, I was just shocked. In the photos I looked like a stunned mullet!”

Mr O’Grady says the special part of the win was that he had his foreman, workers and client with him, and they could all go up on stage. “The crew and I put a lot into that job, so it was really cool to be able to celebrate it with them.”

The beautiful Waiheke Island home was the first-ever entry into the competition for K2 Builders. The challenging build, sitting on a hill right over the bay, totally exposed to the elements from the north-east, required ongoing collaboration between the designer and build team.

“The build was an intricate process. We would create mock-ups of the weathertight junctions along the way to make sure everything was going to work. So it was a lot of problem solving, which I love.”

The home impressed the judges, who said it set the standard for excellent craftsmanship.

“Nestled on the side of a hill with views of the harbour, this home has been cleverly designed to take advantage of the surrounding environment,” they said.

“The home is made up of several pods connected by a central hallway. Different timbers and finishes are meticulous in the ceilings, walls and floors. The exterior cedar cladding has been carefully fixed over a waterproof wall structure, well suited to the extreme weather conditions.

“This is a beautiful home worthy of the Supreme Award, taking a simple design and elevating it to a high art with remarkable attention to detail,” they said.

Mr O’Grady says taking part in the competition has given him a lot of confidence in his work. “Not in an arrogant way, but in a way where I feel like we’re on the right track,” he says.

“The exposure you get from the competition is just outstanding. We’re able to put the awards up online now, and they really strengthen what we’re doing well.”

Mr O’Grady became a Registered Master Builder four years ago, and says there’s a range of benefits from joining.

“I joined the association because of the fantastic resources, the networking opportunities and the support,” he says.

“When you’re running a company you can feel quite isolated, you’re out there on your own. Being part of an association gives you that reassurance. As the industry continues to change, I felt that I needed to be part of an organisation that would help me keep up to date with the changes.

K2 Builders is now a Gold Reserve finalist for the Registered Master Builders 2015 House of the Year award, and will be re-judged before the national event in November.