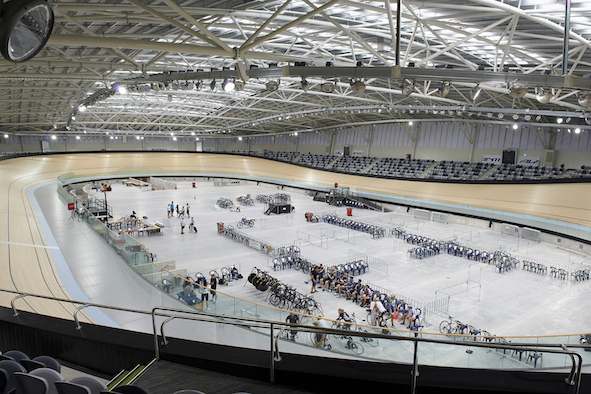 It’s one of Cambridge’s most well-known attractions, transforming the town from a historic tourist spot to New Zealand’s “official home of cycling”.

So it’s hard to believe that the Avantidrome National Cycling Centre of Excellence, the state-of-the-art indoor cycling track and racing facility that services cyclists ranging from world-class athlete to novice, almost didn’t make it to the Waikato.

The mammoth structure, which spans 77 metres across and 120 metres in length, came with a long list of challenges to fit. But the team — made up of Livingstone Building NZ Ltd, CBM Architects NZ Ltd, LHT Design Ltd and Jewkes Boyd Cost Management — overcame the challenging bid process, funding and timing issues to get the track safely into the region.

The team was required to design and build a structure to house the track with minimal information and limited details from track designers who were unwilling to release their intellectual property.

At the same time, the team was attempting to design the building to minimal cost and get approval from the Government.

Livingstone Building project director Mike Livingstone says the project team collaborated extensively to ensure “everyone was on the same page”.

“Building and designing a building that wasn’t a true oval with more than 6000 reference points, with accuracy, was incredibly challenging. Accuracy was imperative — we strived for that each day because the track was coming from Germany and we had no room for error,” Mr Livingstone says.

“We would be sending surveying reports back and we couldn’t afford to have any mistakes or they would have skipped New Zealand and gone somewhere else.”

The team scheduled weekly project meetings, which included subcontractors and contractors who were not yet working on-site.

A thorough understanding of each stage was a necessity as there was no flexibility in the time line. The approach paid dividends, as the project was completed ahead of time and under budget.

The end result, which took out the Industrial category award and Special Award in this year’s Commercial Project Awards, is an impressive testament to the team behind it.

Judges praised the project team’s commitment to finishing on time and budget, as well as the Avantidrome’s unique design that, despite its large and complex needs, was not “just another large and obtrusive structure”.

The fully enclosed 250m wooden indoor cycling track is surrounded by 1500 permanent seats, expandable to fit 4000 during major events. The design allows for unimpeded views within the main arena, while the wood used for the track — Siberian Spruce — is specially chosen for its close grain which means it won’t splinter.

The building also offers conference rooms, a high performance gymnasium with its own doctors and physiotherapists, a gym, Waikato University’s Sports Science laboratory, a cafe, shop and bike storage area. A cycle skills playground is situated outside.

Mr Livingstone describes the Avantidrome as “one of the company’s most memorable and proudest achievements”.

“The Avantidrome showcases what a small country and community can achieve through dedication and drive. Everyone had the same motivation and just wanted to get this amazing facility into the region.

“It shows our ability to compete internationally with its world class facilities that have helped put New Zealand on the map for cycling and high performance sport. It’s been a stand out project, and one we’re very proud to have been a part of.”