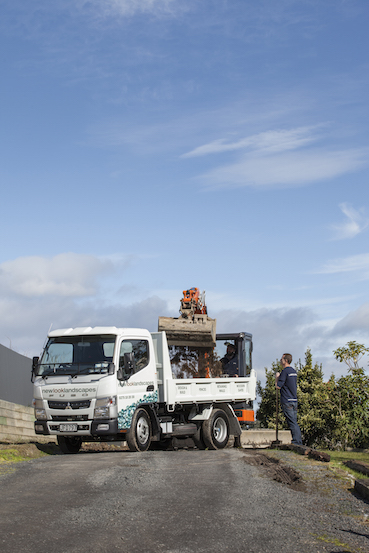 New Look Landscapes director Andrew Perry needed a workhorse that had more capacity than his ute, but which he could still fit down clients’ driveways. A narrow cab Canter tipper proved to be the answer.

“I mainly operate in the suburbs, where narrow cul-de-sacs and tricky slopes such as Maori Hill are tough to access in a big vehicle,” he says.

The tipper is the perfect in-betweener. I can fit a lot more on the back than I could in my ute, and the ability to tip it off saves a lot of work!

Andrew usually starts his day collecting a full load of aggregate from Blackhead Quarry, 5km south-east of St Clair Beach, or picking up machinery from a local hire depot. The Canter is comfortable doing both and, because it doesn’t require an HT licence to drive, he can send any of his staff to pick up a load.

“Sometimes we work further afield, heading down south or into Central Otago. The Canter scoots along the open road, handles nicely, quickly gets away from the lights, and doesn’t suck too much gas.”

As a seasoned endurance athlete, Andrew appreciates having dependable gear that will go the distance.

“I’ve learnt that if you can buy new, you should. I’ve been stung by repair bills on used vehicles in the past, so Fuso’s three-year warranty gives me that extra peace of mind.”

Having spent plenty of time behind the wheel running delivery routes up and down England’s M1 during an extended OE, Andrew has some firm beliefs about what good value means when picking a vehicle.

After eight years away, he returned to New Zealand in 1997. Initially working for a larger firm, he branched out on his own when he spotted an opportunity to do so.

“I think landscaping is often undervalued. A property can get more at resale if the landscaping is already done. A well-presented outdoor area will give you a much greater return than installing a new kitchen, because it helps form the first impression.”

When he isn’t adding value to his clients’ properties, you’ll probably find Andrew out training.

“It’s not a bad way to spend my afternoons. The half ironman is long enough for me. If I put in the time required for the full ironman, I reckon I’d be divorced!”

BT’s Back in Time