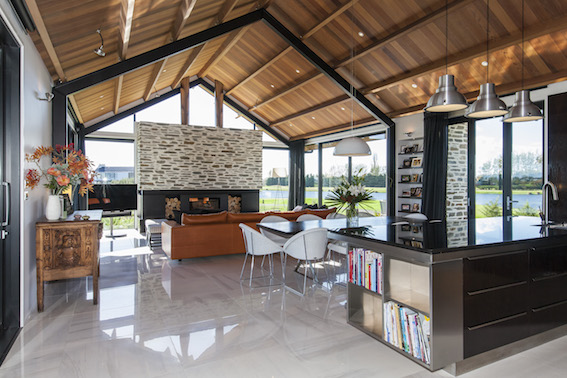 Mark Metzger of Metzger Builders was blown away when he found out his new build in Clearwater, Christchurch, was awarded the national category winner in the Carters New Home $1 million – $2 million category at the Registered Master Builders 2015 House of the Year.

Mr Metzger says it was a surreal experience to win the extremely competitive category, in which 26 other entries were competing for the title.

“We were up against some absolutely amazing homes in the competition. We had high hopes, but you can never assume that you are going to do well. We just had to hope for the best,” he says.

“We were also awarded the Builder’s Own Home Award and the Platinum Award — it was just unbelievable.”

The Platinum Award recognises the achievement of winning five national titles. Mr Metzger says he’s thrilled to have won such a renowned award in the building industry.

“I don’t think the public fully understands the significance of the Platinum Award — it’s much more of an industry acknowledgement. It’s great to win such a respected title within the building and construction sector.”

Mr Metzger says there were some stand-out features in the winning home, and credits the design and owner’s choice of finish.

“The kitchen and living areas are really impressive, with vaulted ceilings and exposed steel work. Even now when I enter the room, I think ‘wow’,” he says.

However, these impressive design features were also the main challenge during the build, Mr Metzger explains.

“There was absolutely no margin for error in anything due to the exposed steel work. If something didn’t fit perfectly, there was no covering it up. The challenge right from the start was you had to be 100% accurate as you never had a second chance.”

Judges were impressed with the Queenstown-inspired home, and called it a fine example of the builder’s pride and passion.

“Vaulted cedar ceilings, a wood burner and a stunning double stainless exposed flue are featured alongside a state-of-the-art kitchen with connecting outdoor living options. The expansive views over the golf course and the adjacent lake, complete the home. A fine example of the builder’s pride and passion,” they said.

Mr Metzger is looking forward to entering again in 2016, and already has a couple of homes lined up. He credits the significant public awareness of the competition and Registered Master Builders.

The Awards are made possible through the support of PlaceMakers, Master Build Services, GIB, Nulook, Future-Proof Building, Carters, Plumbing World, Resene and Bunnings.