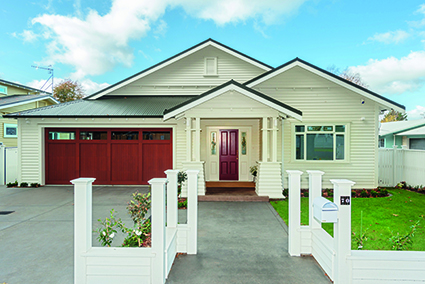 James Rodriguez of Euro Construction was absolutely thrilled when he found out his Hamilton home was named the national winner in the PlaceMakers New Home $400,000 – $500,000 category, along with winning a Gold Award and the Craftsmanship Award at the Registered Master Builders 2015 House of the Year competition.

Mr Rodriguez says winning the award has been the pinnacle of his career in the construction industry.

“A lot of blood, sweat and tears went into this build so it was a really great achievement. Winning the award reflects not just the hard work in this build, but all the different builds you do,” he says.

Mr Rodriguez explains that the key challenge of the build was to ensure the planning and design met City Heritage requirements.

“We wanted to build a bungalow that was in keeping with the style and character of the street. The site was located in the heritage villa precinct of Hamilton East so it was a pretty special location.”

National judges were impressed with the perfect fit of the build into the historic neighbourhood.

“The architect and builders worked to City Heritage requirements, ensuring a build that was sympathetic to the surrounding dwellings while also encompassing a modern practical home,” they said.

“A critical requirement for the clients was the 18° scillion ceiling which has been lined to suit the era of the house.

“The front porch detail and window sills throughout were created to mimic the classic 1930s style. The bathrooms and recessed patio doors were built to be wheelchair-friendly.”

The Hamilton home also won a Supreme Award in the Waikato Registered Master Builders 2015 House of the Year.

Regional judges called Euro Construction’s winning build a treasure, with excellent workmanship inside and out.

“It was cleverly designed and built with care and precision, reflecting the period charm of its neighbours.”

“Winning the award has given us a lot of drive to do the best we can on every build, maintaining those high standards,” he says.

Mr Rodriguez praises the Registered Master Builders Association for its great communication and willingness to help its members.