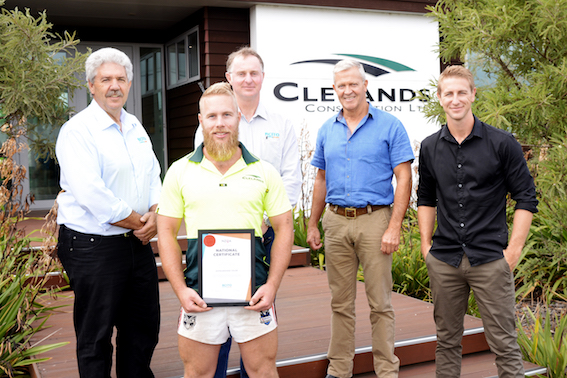 He’s only 26, but foreman Justin Taylor manages a $20 million Taranaki construction site with responsibility for around 50 employees and sub-contractors.
Mr Taylor is the very first graduate of the BCITO’s highest level qualification, elevating carpenters to site manager capability — the National Certificate in Construction Trades (Main Contract Supervision) (Level 5).
Demand for construction professionals is heavy. The shortage of trained supervisors, in particular, means potentially advanced prospects if you follow Mr Taylor’s lead in gaining a higher qualification.
He completed the programme in January, in just under a year. His employer is Clelands Construction Ltd, a major Taranaki construction company with 65 full time qualified tradespeople, including 15 to 20 BCITO apprentices at any one time.
Mr Taylor gained experience as a sub-foreman on two of Clelands’ multi-million dollar projects — the New Plymouth police station and the recently-completed Len Lye Centre.
The company works across industrial, commercial and residential projects, exposing apprentices to a broad spectrum of different types of construction and methodology.
“These projects were a fantastic training exercise for Justin because we’ve been grooming him since he came out of his apprenticeship to become a site manager,” Clelands director Martin Stephens says.
“He’s motivated, keen to learn and keen to accept responsibility.”
Mr Taylor worked as a labourer for Clelands during school holidays in 2006 and, after attaining NCEA Level 2, left school to continue working for the company. He was offered an apprenticeship by Clelands in August 2007.
He worked his way up and was given the responsibility of being made a leading hand (second in charge) and decided to head even higher.
“I felt being placed on Clelands’ larger jobs in a leading hand position showed the faith the company had in my ability and future with them, which prompted me to find the next goal to achieve — the BCITO’s Level 5 Supervision qualification.”
He says he had a great time working on the Len Lye Project. “The challenges of the site kept my mind growing as I worked under another great foreman in the company who tucked me under his wing and showed me how to run an excellent job.
“I’m very happy with the way the building turned out. My favourite part was standing all the 30-tonne concrete panels that form the walls of the building.”
Now a site manager on a major industrial project, Mr Taylor has total responsibility for the programming of works, timely ordering of materials, control of sub-contractors, quality, and health and safety.
He says his skills have been invaluable in helping out friends and family with all things building-related, and the organisational and responsibility side of things have transferred to the rest of his life, helping him grow overall.
For more about the BCITO’s supervisory qualifications, visit www.bcito.org.nz/supervise.