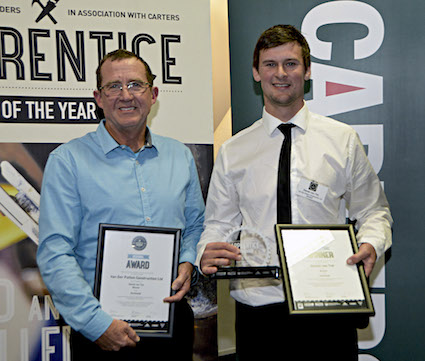 Daniel Van Tiel of Van Der Putten Construction Ltd was overwhelmed when he was awarded first place at the Auckland Registered Master Builders 2015 Apprentice of the Year competition.
The 25-year-old from Karaka said winning the regional Apprentice of the Year was an amazing feeling, and his main goal for 2015.
“To be recognised as a top apprentice in Auckland and to accomplish my goal was incredibly rewarding,” he said.
“The competition has left me in really good stead for my career. It has provided me with great knowledge and the contacts to go further.”
Daniel credited the support of his employer as being a key motivator throughout the competition.
“My boss was right behind me from the start. He has had former apprentices enter the competition so he was familiar with the process. He is always backing anyone who wants to give Apprentice of the Year a go,” he says.
Daniel explains that the interview with the judges was the most difficult component of the competition.
“I didn’t know how to prepare for an interview, and wasn’t sure what the judges were going to ask me so it was quite nerve-wracking. However, it turned out really well,” he says.
“It was great to show the judges around the build during the site visit, where they could see the work that I have been doing,” he says.
Daniel started working for family friend Harry Van Der Putten on a casual basis during university holidays. After studying agriculture at Lincoln University for four years, he decided to move into construction permanently.
“I discovered a passion for construction and realised that I love the practicality of working in the industry. My parents were incredibly supportive, and agreed that there is nothing better than having a trade behind you,” he says.
Daniel encourages apprentices to put themselves out there and enter the competition, as it is a rewarding and enjoyable experience.
Apprentices, employers and young people aspiring to be part of the construction industry are also encouraged to join the Facebook page at www.facebook.com/apprenticeoftheyear.
The Registered Master Builders Apprentice of the Year competition is made possible thanks to principal sponsor Carters, the Building and Construction Industry Training Organisation (BCITO), and supporting sponsors the Ministry of Business, Innovation and Employment (MBIE) and APL through their Altherm, First and Vantage brands.