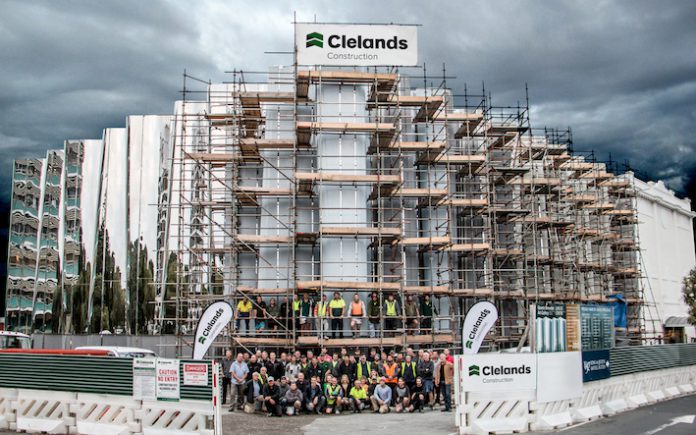 The foundations for “the green army” were laid in 1916 by William James Cleland, who started the company on Devon St East in Strandon, New Plymouth.

Emphasising the family nature of the company, there are also seven father-and-son combinations in the business, and two more staff members whose fathers worked for the company.

Evolving with the times has been a key part of Clelands’ ongoing success.

“A centenary is significant for any business, but the volatility of the construction industry, high levels of competition and a significant risk profile makes this achievement one Clelands is very proud of,” commercial manager Michael Braggins says.

The directors say Clelands’ long-term success is due to the loyalty of key people, a structure that allows for succession and a culture of service and delivery.

To survive and thrive for 100 years also comes down to a conservative approach to financial management and the ability to adapt in times of adversity.

Over the years, the company has been involved in a huge number of landmark projects. “Our most significant projects, those that the community identify with, are those that are frequently used by the community,” Mr Braggins says.

Clelands has also helped provide essential services to the community, such as the New Plymouth Police Station, along with various school and hospital projects.

To mark the centenary, the company has launched a new web site and rebranded the business with the statement “Clelands — 100 years strong”, and an updated logo depicting green chevrons.

“We are referred to as the green army,” Mr Braggins says. The company’s colour is green, the staff are disciplined, the company has strength in numbers, and chevrons also represent peaked roofs.

Naturally, the company will also have some fitting celebrations. “The original founder was an Irish immigrant, so we will also be honouring his heritage with a few drinks with staff and key stakeholders.”

Looking to the future, Mr Braggins says the directors hope the company flourishes for another 100 years. “Clelands is a team of 80 — that’s 80 local families invested in the continuation of the legacy of W J Cleland. We look forward to continuing our service to the community, and building on the legacy our forefathers have established,” he says.