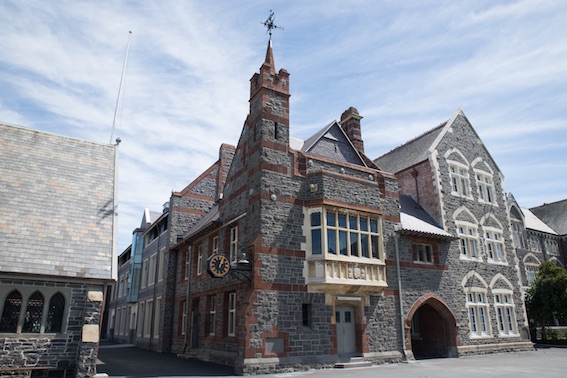 An uncompromising commitment to faithful restoration, despite numerous challenges, means that Christ’s College Hare Memorial Library has been reinstated to its former glory.

There are not many projects in the Christchurch rebuild where historic methods such as stone masonry and slate roofing go hand in hand with the latest engineering techniques and earthquake strengthening.

But the rebuild of Christ’s College Hare Memorial Library merges old and new techniques to ensure the future of the Victorian Gothic-style 100-year-old building.

Taking out the Restoration category in this year’s Commercial Project Awards, and praised for the team’s “uncompromising commitment to faithful restoration”,  Naylor Love senior project manager Stephen Lynch described the project as “one of the most complicated completed at Christ’s College”.

“The cost per square metre was $28,000,” Mr Lynch says. “This shows how much work and effort went in to reinstating this building back to its original features after intense detailed structural strengthening.

“We faced a lot of challenges. The college is a live environment and, as such, we had to maintain full access around the building for the kids to get in and out of class.”

Taking more than 12 months to complete, the team also had to ensure the careful internal deconstruction of all heritage items, including the main staircase, was completed before any work commenced.

Each item was meticulously photographed and numbered before being stored off-site while structural work and services were added.

While seismic strengthening for such an expressive and historic building was a huge challenge, much of the work done is concealed from view.

The heavy masonry walls were drilled from the eves down to the new foundations, and post-tensioning rods installed, while the internal brick walls have been deconstructed to make way for a new shear wall that is propped to the external masonry walls.

“You always learn from every project undertaken. Design changes and moves very quickly, especially when you are dealing with seismic strengthening. While Hare Memorial had nothing really new in design, how we achieved it was,” Mr Lynch says.

“The drilling for the post tension rods was drilled dry. These holes are normally drilled using water to protect equipment and speed up drilling, but with the heritage fabric in this building, using water was not an option.

“After long discussions with the drilling contractor and engineers we resolved this by dry drilling, which was a longer process, but meant no damage to the fabric.

“It’s great to be recognised with this award for the quality outcome achieved for the client.”

“The end result has been described as ‘world class’ by Christchurch’s leading heritage advocate. It’s wonderful seeing the end result, which has truly enhanced the building and kept the heritage.”

“Overwhelmingly, this project demonstrates an appreciation of the building’s place in history, and an uncompromising commitment to faithful restoration,” they said.

“Craftsmanship and technical expertise have been seamlessly applied by the team to the interior and exterior of this small but treasured building.”

Applications are now open for the 2017 New Zealand Commercial Project Awards. Find out more at www.commercialprojectawards.co.nz.